Dance the dance of life!

Apro-FIN-ANYTHING with a flamethrower deserves to get in :) .

True, BG's flames would be good, but they got their flame Stuart wrong, the flamethrower was attached to the bow machinegun, so the mg and flamethrower were fireable.

hmm - nobody mentioned that scary stuka with a tank-gun under it?

An anti-armour version - the model G-1 - was created from converted D-5 model aircraft by attaching two 37 mm 1.5 in FLAK 18 cannon in underwing pods. This weapon was very successful in the hands of highly experienced pilots who could survive daylight operations with the now poor flight-performance of the Stuka. Hans Rudel claimed 519 Soviet armoured vehicles in 2,530 sorties, and was still flying a Ju 87G-1 in the Courland Pocket on the last day of the war.

what about the origional M3, the scout car varient? after all, the M3 was jsut a mod of a scout car, origonally. 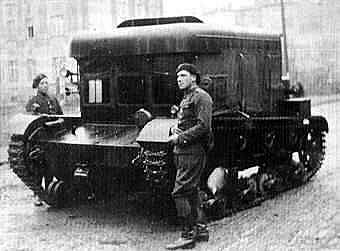 (Ye ye so now I see the first proof of berets)

The point of this thread was what vehicles or variants of vehicles could be made by changing something quickly and easily.

The Ju-87 tankbuster should be a Ju-87D model but since the D is not in game the B model will have to do. The B model with the a/t guns is on Prokhorovka.

It was my understanding that the single seat Il-2 was the very early model but it suffered horrendous losses to Axis fighters hence the move to a two seater with rear gunner.

Well it cant hurt to suggest it afterall i would love to see those vehicles in the next update. I got some suggestions wich seem quick and easy to me: the sdkfz 250 basicly saying the early version of the hanomag cant carry as many troops but it did have alot of variations: Sdkfz 250/9 "Neu" http://www.missing-lynx.com/gallery/german/mb2509.htm The sdkfz 250 with the turret of the 222 it was used in russia because the other types of scout cars performed poorly there. Same armament as the 222. Sdkfz 250/10 "leichter Schützenpanzerwagen" A 250 with a 3.7 inch PaK mounted on it http://www.panzer-modell.de/berichte/250-10/250-10_eng.htm Or even better the sdkfz 251/16 Flamethrower http://www.geocities.com/MotorCity/Pit/3515/251/251-16.htm A 251 with 2 flamethrower on the sides of the 251 and a mg34.