hehe, i found it too (too bad that lightning dropped a hint after i told him that i knew the coordinates of the scoped STG44. Made my search a little easier :( . Thanks lightning for ruining my search! hehe j/k. I'm sure that there are more hidden weapons... guess that I will just have to waste my day tommorow search for them! hehe

I think the scoped stg44 is called the stg44 zf and it could also carry a night vision acope :cool:

MG42ManiacOn the subject of pick up kits....

Anyone found the scoped STG44 yet? Armin told me it was in there on MSN yesterday i spent like 30 mins looking for it but have yet to find it.:(

Man, that avatar is so gay.

TommyGunDalianiMan, that avatar is so gay.

oooo that scoped stg44! i think it would look a lot cooler if you guys put the scope from the g43zf4 sniper in SWoWW2! ill post a pic m'kay 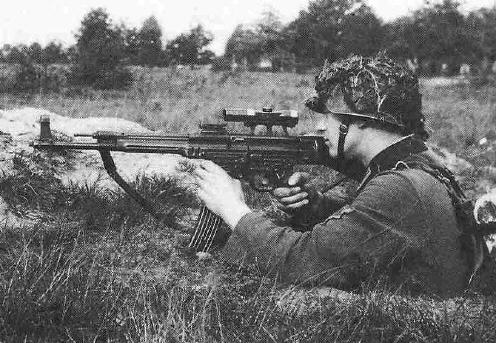 the scope looks like the one from SW on the G43 ya think? o well you guys have done a nice job on everything!

Been here longer than you!

Call me stupid, but why does every cool weapon have to be hidden from view. I mean it takes ages to find a deployable machinegun, snipers are more common, but that stuff.....why even add it if the possibility of finding them is very small.

The Mors SMG is a really nice weapon:

this makes the weapons m,ore unique on a bf because they where not as common as other weapons

and if gives also the experienced FH players an advantage