Hear ye, Hear ye! Beta IV for the Special Extended Edition has been released! :bows: It was a lot of work, but Nazgûl (mod leader) did it! Below a complete changelist:

ALL FACTIONS ------------ - (AI) Many things new to this mod, both structures and units, required new AI coding! For example all things Rohan, and all other things exclusive (new) to this mod, specified in this mod’s PDF ReadMe, like the Noldor and Lórien (Helm’s Deep) Warriors, Dwarven Berserkers, Uruks of Orthanc, Uruk Raiders, Morgul Orcs, Black Uruks of Barad-dûr, and so on... - Knockback Resistance for Heroes completely overhauled. Heroes are now (a bit) more susceptible to Knockback attacks! - Hero and Fortress abilities tuned (Mostly for MotW). Many abilities can now be set to auto with right-click. Most are used by the AI too! - Porters are now able to be sent (sold) back to fortresses. - Porters are now able to repair, instead of Peasants. - Fortress build cost reduced from 40000 to 25000 $. - Siege Machines build time reduced from 4 mins to 3 mins. - Reduced Penalty for many resource buildings to not kick in until 6 are built (on 7th). - Spell Book points maximum limit is made higher, so that there are enough points to buy all Spell Book powers. - Ships now take MUCH more damage from Siege Weapons and thrown Rocks. - War Ships make less damage to flying beasts. - Flying beasts make more damage to Ships. - Lair Treasures give much more cash when looted. - Wall Hubs have longer build time to better match the long stretches of Wall segments possible. - Added correct wall armorsets for WallUpgrades (were too weak, used default NoArmor as armorset). - The lack of Bounding Boxes in new models that makes them hard to click in game have been compensated with Cylinder Geometry in codes, which is supposed to ease high lighting in game! (Works only slightly better though). - Reworked the use of Inns! Inn's should now be interesting and fun to use, for all faction players. Sûlherokhh came up with the idea of having mercenary hordes available for recruitment, that don't normally belong to that faction. This means that Men should be able to recruit Dwarves and Elves in there while Isengard can find Mordor and Goblin units, and so on... These units will need time to be persuaded though, they will cost a little more and they will also be very limited in numbers.

CaH --- - CaH REVIVE-Button removed from the Fortress Commandset when CaH 'unchecked'. - Removed Knockback from CaH archers, and moved to Legolas, but with less strength.

MEN --- - Rohan Battle Tower & Rohan Golden Hall have been given proper build-up animations. >>> Credit: ZIMOO - Rohan Golden Hall is now prerequisite for Rohan heroes to "arrive" (enable) in the fortress. - Rohan Golden Hall enables Peasants to be recruited from Farms. - "Draft" for Peasants (gives Shield + Sword to all active hordes) can be researched in the Rohan Armory and dispatched through the Golden Hall. - Rohan Stable is now a prerequisite for all 'Mount' abilities, instead of experience levels! Faramir will need the Gondor Stable to mount. - Rohan Archers have been made into "real" Rohan (Yeoman) Archers with new skins instead of the Men of Dale skin they use in the retail game. They even have Yeoman Audio now! - Level prerequisites for many powers have been seriously reassigned for all MotW Heroes, except Théoden. - "Heart of the Warrior" ("Last Stand") and "Fiery Temper"; new abilities added for Boromir! - "War Speech" ability for Faramir added, usable when mounted, affecting only Gondor Knights much like 'Glorious Charge', only greater increase in weapon damage (300%) and NO armor bonus. Should be reminiscent to Faramir's suicidal attack on Osgiliath. - Théoden’s "Glorious Charge" now only affects Rohirrim. - Bubble Shield ability for Gandalf from BFME1 is added. The ability is used automatically to defend Gandalf under certain conditions, but can also be activated manually by pressing 'L'. - Gandalf automatically becomes Gandalf The White when he dies (and is revived). Shorter recharge, increased spell strength and the 'white' skin. New Revive Button and Mouseover. - Eowyn is made a LOT more interesting with the new "Dernhelm" power (at level 1), which she can also use to disguise as a peasant woman. This ability can only be activated when no enemies are close to her. She will then be able to use allied Peasants and Rohirrim as camouflage, just like elves use trees. She will ONLY be discovered, if she comes too close to enemies, or if she uses one of her battle powers that deactivate 'Dernhelm' entirely! - Eowyn does extra damage towards Witchking. - Rohirrim weapon toggle animation glitch is fixed.

ELVES ----- - Gwaihir can no longer be summoned too fast by the AI (before the nest is built). - Noldor Weapon Song power is not displaying the wrong banner carrier (Lórien Archer) anymore. - Galadriel abilities (level upgrades) and voices polished. No hearing her now when the enemy builds her. - Glorfindel is reskinned to blonde. A very pale blonde though. - Glorfindel now deals more damage to Nazgûl (200%). - Frodo's sword Sting now only glows when Orcs, Uruk-hai or Spiders are approaching. Frodo Audio is triggered when that happens ('Orcs are near!' , 'Sting!'). - Sam's Frying Pan attack is added! - Lórien Swordsmen had 2nd Age shields. They are now removed (by request from Team Member "Mordor Slayer"). - Silverthorn Arrows were too strong against powerful things such as Balrog, Fellbeasts, Mumakils, Trolls, etc. Fixed! - Another (4th) Ent model Ash is added. Only melee but 10% better at it. - Gwaihir (and other Eagles) have been given falling death anims!

DWARVES ------- - "Dwarven Diamond Mine" is changed into "Dwarven Mithril Mine". - Dwarven Throwing Axes was WAY too strong against structures! Debuffed. - Berserker abilities and voices polished. Axethrow at Level 2. All can be set on auto (right-click). - Dale Swordsmen are added as early units. (Basic model from Deluxe Edition). - Men of Dale used Rohan Archer banner carrier. Switched to Dale skin! - Dwarven Archery Range is removed. Axe Throwers are moved into Warrior Hall. - Dale Barracks with Dale Archers and Dale Swordsmen are added instead of Archery Range.

MORDOR ------ - Fellbeasts have been given falling death anims! - Polished WK's Fire Sword FX. >>> Credit: {IP}LORDOFDARKNESS - Change Attack Troll's upgrade to "Steel Mace" to Siege Mace or Iron Mace (no alloys in Middle Earth?). - Mordor got a Hero Statue with healing, area bonus and infantry discount. - MordorLargeGroup Bonus FX (shouting and glowing when a mob has collected). - Aligned Orc Horde Commandsets so that you can buy upgrades collectively. - Mordor's "Basic Training" technology is moved to Tavern to make room for more units in the Pit! - The Nazgûl Fellbeast dismount are polished. Removed diverse Nazgûl EVA messages when re- mounting. - Orc makeover! All regular Mordor Gorgoroth Orcs have been given new models and skins from the cancelled Deluxe Edition. >>> Credit: NIGHTMARE & DLotS of BFME+ - Morgul Orcs have been added. Basic model from the cancelled BFME+. Can use Forged Blades and Heavy Armor! >>> Credit: THE DEAD PLAYER - Black Uruks of Barad-dûr have been added! - Black Uruk captain; Shagrat is added. - Attack Troll "Siege Mace" (Collector's Edition) upgrade: the Attack Troll's gigantic spiked mace is now a BUYABLE upgrade, from research at the Troll Cage. - Mûmakil "War Gear" upgrade: Mûmakil's upgrade with Spikes and War Paint is now a buyable upgrade from the Mûmakil Pen, instead of just gaining it all from experience on the battle field. - Walls have been given to Mordor - genuine Dol Guldur walls that match the fortress perfectly! >>> Credit: FLAMEGUARD

GOBLINS ------- - Goblin Drummer is implemented. >>> Credit: Model donated by ARGOLIS - Mountain Giants are now able to crush trees while walking. >>> Credit: ROBNKARLA - Walls have been given to Goblins. Simple material, like a fence. - Goblin "Holes" (rubble left by Goblin buildings that can auto repair) now have their health adjusted to the new health scale of units and buildings. I'll post this on the network site, great work guys!

Thanks Fireplay, it's an honor :).

No problem, mods need all the help they can get these days, a little advertisement can get them everything :D Tell me if you need more advertising I got many contacts with other sites, they can stick it up as their main news.

:bows: That would be awesome! Which sites, for example?

That would be splendid!

Captain Jackson! For those who don't know, PJ played a small role of a corsair in the ROTK (Extended Edition), but get's shot by Legolas. And now he's in the game! 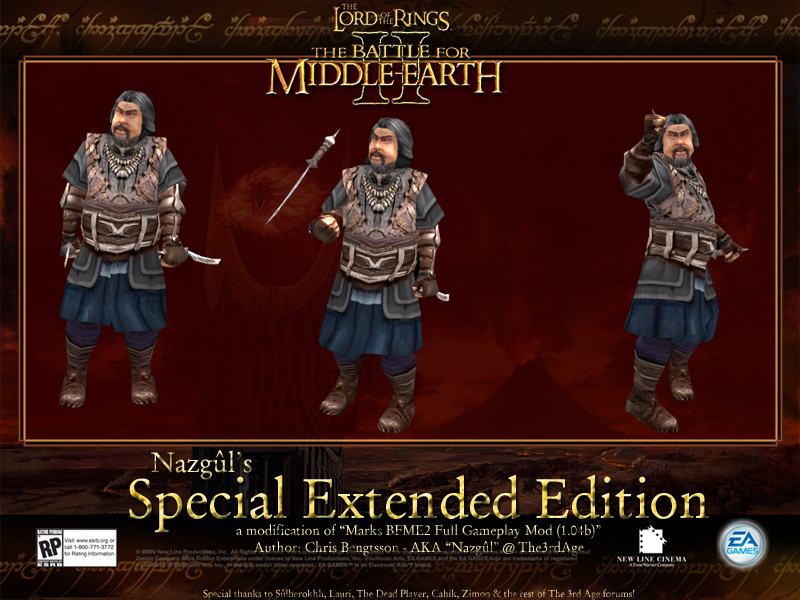 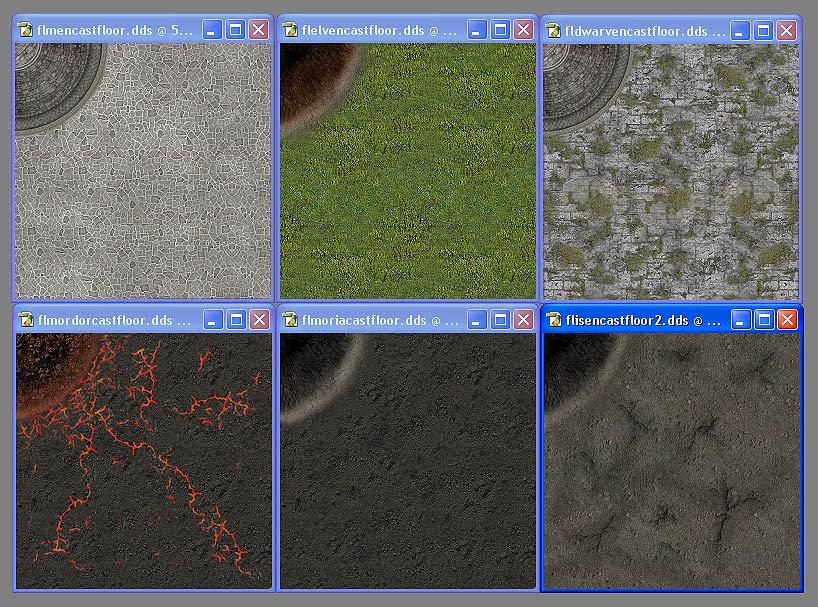 @Fireplay: how about those previews you promised ;)?