Indeed, I would take pleasure in alienating such groups. :sitonit:

I wonder how you can make a Doom movie with a storyline from a Doom game that doesn't have a storyline....oh, I know! Screw the whole damn thing up!

that guy whos playing the marine (Karl Urban) looks right for the part, if youve seen the cutscenes from doom 3 you'd agree

Lt. :"Alright, guys, on three. One. Two. Three." *charge on door explodes* *door caves in as smoke erupts from doorway. Cue roars of surprise inside.* Soldier #1: "AAAAAAhhhh!!!" *charges through door, firing weapon blindly* *Soldiers #2 - 8 follow screaming and firing too* *More gunfire, more roars, a couple high pitched screams* *Lt. looks at his watch.* *Now just gunfire is heard from the room.* *Soldiers 3, 5, 6 & 7 exit the room.* Soldier 3: "They got Billy, Cutter, Mark & Paul. But on the plus side we found these neat weapons, armour and power-ups." Lt.: "Right, next room then. "

It just writes itself, dunnit?

The movies nearly always spoil the book/game theyre based on.

Not on mars...yeah, sounds like it will suck a lot just by that, if they cant keep the most basic part of it right, they wont do the rest of it right.

billyThey should have just use the Book, Knee Deep in the Dead, as a blue print for the script.

yes! i've read it, Hell On Earth, and Infernal Sky by Dafydd ab Hugh and Brad Linaweaver and they are great! i've yet to pick up End Game, though. if the movie were bassed on Knee Deep in the Dead i'd watch if in a heartbeat.

the 1st pic comes out. 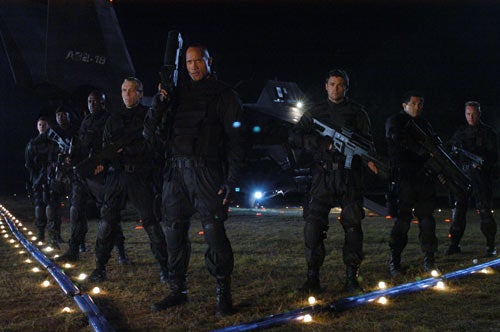