today's installment of Fuzzy's WWII exotica and erotica is about the Habbakuk, a proposed British aircraft carrier built of "Pykrete"--a mixture of wood pulp and ice. 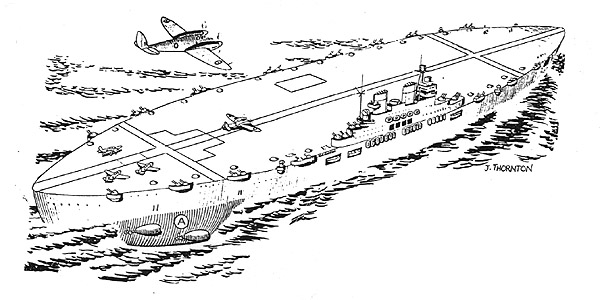 The idea was to address the early war shortage of carriers by building this 2,000,000+ ton monster out of an experimental material which would not melt in the cold North Atlantic, but which was strong enough to build a ship from.

Here is a bad scan of a design cut-away:

Some pictures of the shed in Alberta (CA) where a prototype was put together: http://www.stormy.ca/marine/habbakuk.html

Now if we could just convince the devs...

I love my ball

I seen that on some experimental weapons show on the history channel, would of been an amazing sight if one was built.

dumbass idea if you ask me

Torpedoes wouldn't do much damage to that...and seeing that the Germans lacked surface fleet it sounds like a plan. A bit too big though, and operational limitations to the North Sea could be a problem...but sounds good otherwise.

P.S....that is if the Brittish had some powerful freezing machines....and were really desperate.

A neat idea. Flame thrower anyone?

your mother is a beaver

Awesome, enough to go around when you need some in your drink :D

"Able seaman polska, do not use the flight deck for making scotch on the rocks!"

Along a similar line: barges were actually made from concrete during the war (in Britain) because of wood and metal being needed for the war effort...