Watched U-571 and The Big Red One today. The former blew major ass but TBRO was really good. Hiro, that 1941 poster is about the first sensible thing I've seen you post in a long long long time. 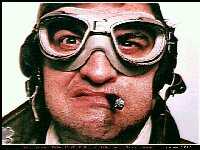 I remember seeing wind talkers for the first time . the expresion on the faces watching it , ahhh priceless - All quiet on the western fronts good

I love too many war movies to single them out. :(

However... I do know my favorite war series... Tour of Duty.

The DVD set that Sony released is complete crap though.

As long as we are not sticking to WWII, one of the best battle movies ever is Waterloo. Starring Rod Steiger as the mercurial Ogre of Corsica, and Christopher Plummer as the icily unflappable Iron Duke, th movie has many othe good performances as well. Made in 1970, the film had 20,000 extras, supplied by the Soviet Army, to represent the soldiers of the British, Prussian, and French armies. I have never seen 19th century warfare done better.

SoujiroI love too many war movies to single them out. :(

However... I do know my favorite war series... Tour of Duty.

The DVD set that Sony released is complete crap though.

Dude i love Tour of Duty to, always one of my faverites, but why do you say the DVD release is crap? because i was going to get it and i would just like to know why you think that??

The video quality is not great throughout the DVD.

They replaced the 60's soundtrack "to be more attractive to younger audiences".

And a couple of other reasons.