No comment. I know the background on these, but I thought I'd post them as an interesting bit of visual exotica for people here. It's by no means complete, but a neat little sample: 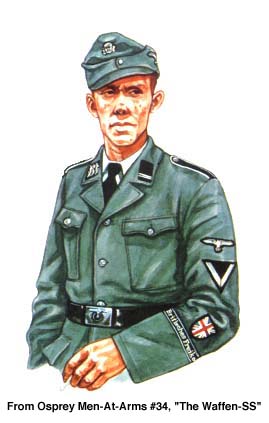 Order of Azad, uniform and badge Have fun, discuss amongst yourselves.

its just my oppion but if those brits joinded the SS they should be shot it realy made me sick to find out they did do that.

the first picture is the english in the ss WOW :naughty:

Stiner, care to tell us what countries the 4 other pictures are from? As far as I can tell, the last picture may just be average Germans.

the order of Azad guys are the indians. the fez guys are croatian.

GauntletStiner, care to tell us what countries the 4 other pictures are from? As far as I can tell, the last picture may just be average Germans.

the last picture i think i got that from the same site if i fine the link i post it sorry :D

That last picture looks like the guys hand is mangled, one of his fingers is missing?

Nah, he's holding his hand in a fist. I think it's just the stuff behind him and the general quality of the photo that make it look like his other fingers are sticking out straight.

Wow I've heard of the British Free Corps but I've never seen any pics of them. Thats really neat.