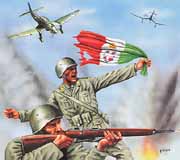 First yes and second was made in 1945

thank you! I learn something today, I don't know this massacre (one more for whermarcht ww2 (note for german people of course))

Dont know how will this raise moral but i like it.

harsh critic out of love.

if fh put's some posters in.. i think they should make them look torn a little around the edges..

162eRI;3180175Yes, massacre of Polish soldier:mad: and officers in Katyn by the Ussr soldiers ;-( the most "awful" is that Stalin want to accuse the germans soldiers of this crime at Nuremberg > but every body (US and british intelligence service, presidents of winner countries ...) know that was a Ussr crime ! We know this crime since the fall of Ussr 1991, and with public declaration of Kroutchev (?) I think it's a german propagand for alliedpolish soldier or civilian polish ???

Wow, I'm sure a little massacre is more important than MILLIONS of soldiers dead!!!