Properly played, this map can be an absolute blast for both teams. But all too often I see the good times smashed to pieces by some terribly rude, point hungry jerk. Here is what I propose to fix it.

Give Germans at least the Faustpatrone 30 Klein. It is mid 1944. Something tells me that the practice of tossing several handgrenades tied together at a tank had died out well before this year. Hell, maybe give it to one in three assault soldiers instead of that pointless rifle grenade.

Remove the American Bazooka, and fix other weapons. They are supposed to be British, correct? Then give them a PIAT, not a Bazooka. A Sten Mk.II, not a Thompson. A Bren, not a M1918 BAR. Get the idea?

Remove the Jagdpanther. The Germans have a Tiger Ausf. E and a Stug III Ausf G already. The Jagdpanther is just overkill. Perhaps replacing it with a PaK 40 located in the northern headgerow is not a bad idea. Unless the Jagdpanther is in there for some aspect of historical accuracy, I see no reason why it should be on this map.

Lay tank traps and barbed wire. This would help protect against those dastardly backcappers, as well as keep the Germans from going up too close to the British base.

Change MG42 kits to MG34. The map is too small for the MG42. The only way that I ever see it get used is in close quarters combat bunnhopping newbness. Not cool, for either team. Hell, perhaps take out the LMG class altogether and replace it with a deployable HMG class that can fire the weapon inaccuratly unsupported or from the tripod.

MAKE IT A PUSH MAP. Nearly every single time that I have seen this map played, the Germans rightly dominate for the vast majority of the time. Then some smartass in a Cromwell or Universal Carrier loads up a few buddies, and makes a bee line for the rear flag. Next thing you know, the German armor peels back to cap a flag that is not infested with anti tank infantry. Making it push will actually make the map into a decent, prolonged battle.

Give the British a mortar battery. Those damn Panzerschreks sitting in the wheat field are a tough itch to scratch, especially with a Stug III, Jagdpanther, and Tiger breathing down your neck. A mortar battery could not only help kill those ambushing anti tank infantry, but could also kill armor with the right amount of skill and tons of luck. Plus, light artillery support on a map like this is just plain realistic.

Make the Achilles already! We have the M10 obvisouly, and the 17lbr barrel can be taken right from the Sherman Firefly. All that is really needed for, an albeit ugly, Achilles is a simple counterweight on the rear of the turret. Now, if this was not in service yet, although I am pretty sure it was, give the British a covered top M36 Jackson. After all, if the map makers have no problem equipping the British with American weapons, then why not giving them American armor? 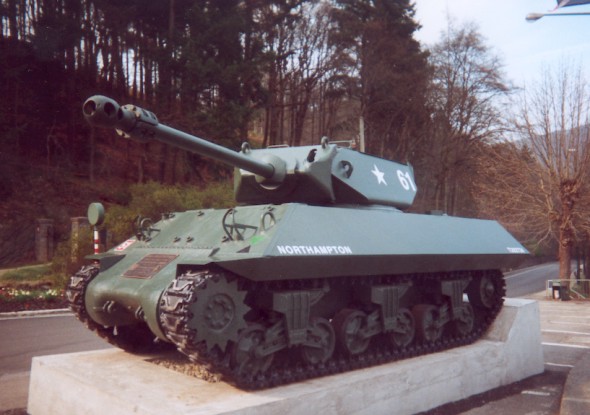 The Achilles TD. An M10 modified with an OQF 17 pounder ATG, and a counterweight to balance the increased mass of the larger cannon.

you said it was british so why does it have an american star on it?

It all sounds very good and very valid. I too feel that whenever I play that map Im missing half the potential of it. I am curious why the Devs dont make more maps pushmode. only maps with front lines like Tobruk should be left open, though if it could be done so that all the first and second lines had to be captured to take the main, then I'd want to go with that.

Did you read the last update?

Hello, and welcome back for the latest Forgotten Hope news update. This week, our theme is light armored vehicles. Before we get to the good stuff, I want to make a quick report on the upcoming Fan Map Pack for Forgotten Hope. The following maps will be in the map pack, and the mappers should be reminded that they have until October 14th to complete any tweaks that they would like to see included.

* A Day of Zitadelle by benseras * Burma by Lt. Havoc and FRITZ * Cretan Village by Mr_Cheese * Nuenen 1944 by mArs * Road to Ramelle by Bizness * Tulagi by Real-BadSeed

USMA2010Remove the American Bazooka, and fix other weapons. They are supposed to be British, correct? Then give them a PIAT, not a Bazooka. A Sten Mk.II, not a Thompson. A Bren, not a M1918 BAR. Get the idea?

Remove the Jagdpanther. The Germans have a Tiger Ausf. E and a Stug III Ausf G already. The Jagdpanther is just overkill. Perhaps replacing it with a PaK 40 located in the northern headgerow is not a bad idea. Unless the Jagdpanther is in there for some aspect of historical accuracy, I see no reason why it should be on this map. [/QUOTE] You haven't seen the Band of Brothers episode, Replacements. The Neunen map has the exact same number and type of vehicles as seen in that episode, also in the episode only US Airborne Infantry are involved, fighting alongside British Tankers. My biggest problem with the Band of Brothers episode is that they are accompanied by three Cromwell Mk.IV's and three Sherman II's, with not a Firefly or Challenger in sight, this is historically inaccurate as a tank troop conprised three 75mm Gun Tanks and a 17pdr gun tank (later increased to two 17pdr gun tanks). Anyway i think the British/Americans should have: 3x Sherman, 1x Firefly and 2x Stuart or maybe: 2x Sherman, 2x Firefly and 2x Stuart. The Stuarts might be useless against the likes of the Jagdpanther, Tiger and StuG.IIIG, but could be handy against Infantry, including the Stuarts would be historically accurate, as they could represent vehicles 'attached' to a Troop from the Regimental Reece Squadron.

[QUOTE=the_M6D_legend]you said it was british so why does it have an american star on it?

The star was used by all the Western allies as a recognition aid, even the Red Army used white stars to a limited extent, even painting them onto captured Panther's.

I would love to see a Stuart on this map. It would create total mayhem.

This would be like the Stuart in Brothers in Arms, completely useless against any tank, but a real infantry killer, especially good against dug-in mg-nests.

I like this map because it is challenging for both sides. Axis has two great AT tanks and no faust. Allies have lots of tanks and bazooka. It is great to steal a bazooka as axis. Also the axis have a panzershreck kit or two.

Bazookas, Panzerfausts and mg42's should be limited to a few pickups. I think the Americans (yes make them americans since only the tankers were Brits) should get 2 Shermans, 1 Firefly, 1 Cromwell, 2 Stuarts. I also think the Jagdpanther should not be available from the start because it's so little room for flanking. 1 Tiger on one side and the jagdpanther at the other is very hard. And add mortar kits and a browning .30 kit.