It can be an individual game or a series. AVP series because the series itself is unique, in that it contains 3 perspectives, each with their own kind of genre aspect about them and play vastly different from one another and they just have tons of replay value.

Probably Knights of the Old Republic because of its fantastic story and different gameplay. I really don't have an overall favorite game though.

Armada series. Two over one

For me it would definitely be Dark Forces 2: Jedi Knight and it's expansion pack Mysteries of the Sith. Great music composed by John Williams specially for the game + interesting storyline + cutscenes with live actors (only in DF2, though; MotS used it's own engine for cutscenes) = me spent entire afternoons playing. =p Difficult to decide. I don't think it is easy to compare games from different genres but the most fun I've had was probably while playing RPGs. I'd say the best RPG overall was Planescape Torment, it had the best atmosphere, dialogue and humour of any game I ever played.

Gotta say Crysis because I've killed more hours in the Sandbox2 editor than any game ever. =p

Deus Ex, both the PC and Ps2 versions.

The game is so deep that I'm on something like my 40th playthrough - and I'm still discovering things! Just yesterday I started another playthrough, this time on the PS2 version - and I found that it had keyboard and mouse support! I also discovered another 'chat' between two of the 'terrorists' on the first mission.

Also, this game combines RPG & FPs really well. You can make it so no two playthroughs are exactly the same; choosing to be an action or stealth orientated guy, a hacker and/or a lockpicker etc. The augmentation system is also really well done, you have to choose one out of two abilities for each body part (except for the torso, there's three slots for that), and that's only if you find the corresponding augmentation canister for it.

I liked the fact that it actually rewards you for choosing to explore. For example, a stuck out brick on the floor may be either unnoticable or seemingly insignificant, but if you press it, it reveals a room or a cache that may have an augmentation upgrade canister! Speaking of which, I also liked the way that the game didn't give you the chance to upgrade EVERYTHING fully, unlike it's sequel, which allowed you to several times (i.e There's a total of something like 24 possible upgrades (3 for each body part if you have the aug installed) but only about 14 canisters).

The combat is good, you can't go in with a stock assault rifle with no skill points invested in it and hope to do well; you need to have some accuracy upgrades for it, some skill invested or at least take your time with your shots (when you're still the reticule gets smaller and smaller to show how accurate the shot(s) will be).

I love the choices you get in the game too, there's no bullshit Karma or Darkside vs Lightside, you get different results and rewards based on who's alive, who has died, who you've aided (e.g Ford Schick for Smuggles gets you a discount) etc.

The story is also well done, you're aware of your objectives and their consequences afterwards, you're aware who you're fighting for 'clear' reasons and why the world has shifted around you. There are enough newspapers, people and info terminals to give you a broader picture of the world of 2052, some thing directly related to you, some things indirectly related, and most of it just there showing a much bigger world than you're aware of (e.g Newspapers mention a Lunar Mine, but you never visit it).

I just find myself constantly coming back for more, and finding something different near enough everytime, whether it some new information in the form of datacubes spread out around the world, conversations that may or may not happen depending on circumstances, and even entire new secret passageways and rooms. I would in fact reccommend it to both the casual and devoted gamer, as it is playable by either party. After all, I began playing it when I was 8!

Most definitely the well-known game, Knights of the Old Republic. The game contains an excellent storyline and, as mentioned before, a different gameplay. I don't want to spoil anything about the storyline, so that's all I've got to say. 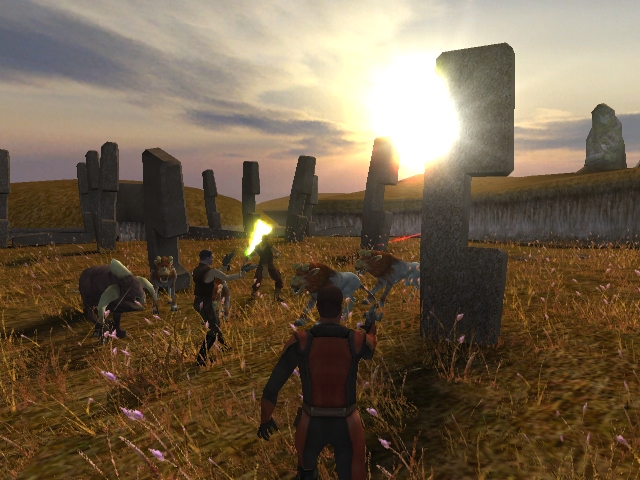 Damn, I'd have to get back to ya on that one, it'd take forever to decide.