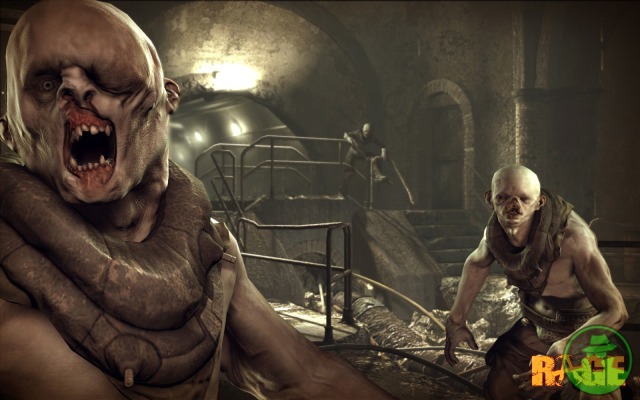 iD is making a new FPS (i bet your all aware of it by now) and it's got some pretty insane graphics, the engine itself supports up to 128,000 x 128,000 resolution and has over 20GB's of texture data. It uses a new Megatexture approach "This means that developers do not have to concern themselves with memory constraints or texture limits, as the engine will stream textures into memory as needed. This will simplify the creation of content and eliminate the need to adapt content for different platforms.", within the shading and shadow effects, a penumbra effect was also witnessed, and, guess what, HERES THE REAL KICKER "John Carmack mentioned in his keynote at QuakeCon 2007 that the id Tech 5 engine will be OpenGL- and DirectX 9-based". Seems like iD is stepping up, back into gaming as the graphical champions, they revolutionized FPS's in 1993, and again in 2004 with DOOM 3, FPS wise and graphicaly, and now it's going to do it again in 2010. (all screenshots are all ingame)

I just creamed my panties.

Pic 4 is extremely close to real (looks like Don Knots by the way).

I wonder what rig you'll have to use to run it at max?

LOL, will you ever stop with the hype about what you always claim to be in game screenshots bud? Clearly you are no expert on the subject and have been corrected several times on what you are claiming to be gameplay graphics.

The bigger topic right now is Id having been recently acquired by Bethesda's parent company ZeniMax Media, and whether it will limit their creativity, beta testing, game release quality and patch support.

I wonder what rig you'll have to use to run it at max?

EDIT: Oh, now I see it, it wasn't loading before.

[QUOTE=>Omen<;4940300]LOL, will you ever stop with the hype about what you always claim to be in game screenshots bud? Clearly you are no expert on the subject and have been corrected several times on what you are claiming to be gameplay graphics.

It doesn't even look that much better, if at all, than Crysis, IMO.

computernerd;4940309It doesn't even look that much better, if at all, than Crysis, IMO.

I purposely avoided commenting on that because it just encourages him to keep bringing up these ridiculous in game graphics claims based on pure speculation.

I DO believe the iD Tech Engine 5 will look fantastic, but who really cares if it looks better than another game. Carmacs stuff has always very "stylized", where the CryTek engine tends to go for more photo-realistic. Also, the "mega-textures" you speak of were used in Quake Wars: Enemy Territory, & looked nothing like the pre-release "in-game" screenshots. All that being said, I do look forward to the game Rage.

Well the nice thing to hear is the open-gl part. Definitely means a plus for linux. But while pics 1+3 do appear to be possible in game, 2 and 4 are almost definitely just a showcast of the engine. While it's great that you have hyperrealistic flies, no one will care. Unless you actually somehow go down to those flies. And even then, no one is going to put that model directly in game on human scale.

Why does everything look like it has a sepia filter over it.