today.reuters.co.ukTORONTO (Reuters) - An Air France plane was on fire after apparently skidding off the runway at Toronto's Pearson International Airport, aviation officials said on Tuesday. artery. A ticket agent in Montreal with Air France said the plane was its AF358 flight from Paris to Toronto, an Airbus A340. "That's all we know," the agent said. Witnesses told Canadian television stations that the plane, configured for 252 passengers, had apparently skidded off the runway after coming in to land in rainy conditions. It was too early to say what might have caused the plane to miss the end of the runway. Live TV pictures showed smoke and flames coming from the fuselage of the plane, which was off the end of a runway lying close to a main traffic [/QUOTE] ________________________________ [QUOTE=cbc.ca]An Air France jet with 200 people aboard has skidded off a runway while landing at Toronto's Pearson International Airport, bursting into flames and sending thick black smoke pouring into the air. There is no word on the condition of the passengers and crew members on board the A340, with the plane still burning 90 minutes after the 3:50 p.m. crash. The jet crashed through barriers and ended up in a small ravine at the far west end of the airport, the fuselage tipped down and the aircraft's tail in the air. The airplane was trying to land in bad weather when it skidded off the runway into a forested area just metres from one of Toronto's busiest roads, Highway 401. Many passengers reportedly escaped the scene and were rescued near the highway. One news service reported the flight to be Air France flight number 358, a Paris-based flight which had earlier stopped in Montreal. "An Air France plane landing on runway 24 went off the end of the runway in the area of Convair Drive and the 401 area in Mississauga," Peel police Sgt. Glyn Griffiths said at about 4:30 p.m. The incident happened as most operations at the airport were halted because of severe thunderstorms in the area. "There was quite a downpour. The visibility was really bad, with lots of lightning," said John Findlay, a CBC News journalist who was at the airport at the time of the accident. All incoming flights have been rerouted from Toronto to Ottawa. according to sky news, both the pilot and co-pilot are safe, thats all ive heard on the subject of casualties so far, only just come through 20 minutes ago

I hope the people on the plane are alright. Does it say anywhere what type of bad weather?

It could be just a pilot error, thick clouds caused poor visibility, and they landed to far out and with the rainy runway, they couldn't stop the plane. Those planes are huge and need alot of room to stop. Hope everyone is okay on it.

yeah A340s are huge, heres a pic of one for those who dont know 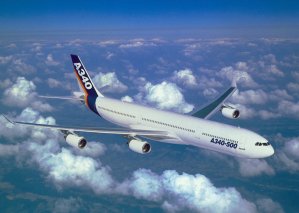 Phoenix_22Hope everyone is okay on it.

They're interviewing a few people who have gotten off of it...but I'm pretty certain there will be a few casualties.

but I'm pretty certain there will be a few casualties.

yeah theres bound to be, i hope they are minimal though

me too.sorry to hear that but relieved to hear there were no serious injuries or deaths.

Well, so far they have said there are no deaths. From what I've heard everything electronic in the plane shut off, and by the time it came back online they couldnt do anything to stop it.

From what I've heard, it was either hit by lightning or skidded on the runway. A340's have safety measures for stuff like that, so I'd be surprised if there are any casualties.