Talk about asking for trouble...

Even the people in the back look terrified.

SeinfeldRules;5209077Even the people in the back look terrified.

They also look like they just clawed their way out of a grave.

I don't know what I'm doing

SeinfeldRules;5209077Even the people in the back look terrified.

The guy on our right looks more like he's ready to use that towel on his head to rape someone (don't ask me how).

And the guy on our left appears to have been battling an addiction to smoking, but couldn't help but notice Nicholson's cigarette.

If this hasn't been edited, then it is very disrespectful, but then, we live in a society that easily disrespects the deceased. Hardly unexpected.

Aerilon;5209951If this hasn't been edited, then it is very disrespectful, but then, we live in a society that easily disrespects the deceased. Hardly unexpected.

How is it disrespectful?

You could also look at it as a sign of respect, honoring the very good acting and sort of embracing it, enjoying it.

Ofcourse it really comes down to the person, people in question. Some like to mourn and be relatively silent, others prefer to remember the good times and smile/have fun.

Admiral Donutz;5210152How is it disrespectful?

Are you fucking kidding me.

It looks photoshoped, I've seen this image on the internet too. 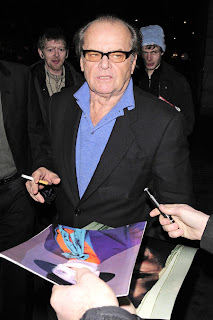 You know he lives in the Netherlands, right? Cut a guy some slack for once.

They're basically asking him to autograph a picture of a dead guy, which in turn is saying that they think the dead guy did a better job than he did playing The Joker.