The tallest building in the world, and it still has a while to go (another 200 or 300 metres).

"There is speculation that, spire included, the final height could be more than 800m, but Emaar is keeping structural details secret.: 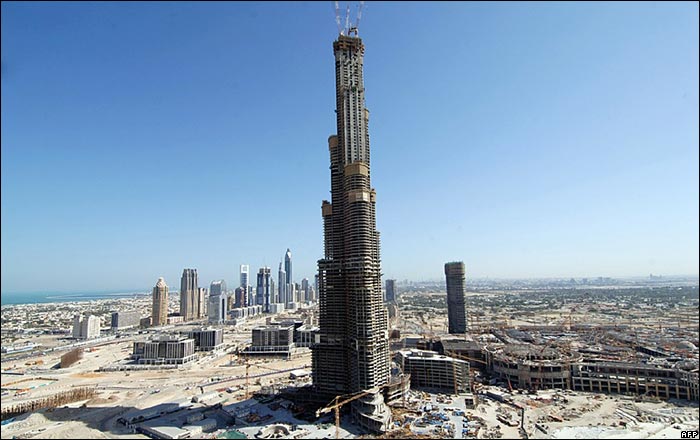 I saw it when I was in Dubai in January from the ground, and then from the plane, and it's larger than I could realistically imagine. Had to see it to believe it.

The spire of the building is expected to be able to be seen from 100km (60 miles) away.

It was only a matter of time before Dubai made the tallest building. They already have the tallest hotel. I think it's a nice feat to accomplish, does anyone know what the building will be used for?

The Burj Dubai has been designed to be the centerpiece of a large-scale, mixed-use development that will include 30,000 homes, nine hotels such as the Burj Dubai Lake Hotel & Serviced Apartments, 0.03 square kilometres (0.01 mi²) of parkland, at least 19 residential towers, the Dubai Mall, and the 0.12 km² (0.05 mi²) man-made Burj Dubai Lake. The complete 2 km² (1 mi²) development will cost about US$20 billion. The silvery glass-sheathed concrete building will restore the title of Earth's tallest structure to the Middle East — a title not held by the region since Lincoln Cathedral upset the four millennial reign of Egypt's Great Pyramid of Giza in 1311 AD. The decision to build Burj Dubai and other skyscrapers is reportedly based on the government's decision to diversify from a trade-based economy to one that is service- and tourism-oriented. Currently, Dubai has a population of 1.5 million crowded into less than 10% of the city's land. Desert covers over 90% of Dubai's 4,114 km² (1,588 mi²) land.[12] According to officials, it is necessary for projects like Burj Dubai to be built in the city to garner more international recognition, and hence investment. "He (Sheikh Mohammed bin Rashid Al Maktoum) wanted to put Dubai on the map with something really sensational," said Jacqui Josephson, a tourism and VIP delegations executive at Nakheel Properties.[13]

closer to the edge

and i thought these towers were tall...

Those are still the largest twin towers I believe.

Showing off the insane wealth of a tiny country that doesn't feel the need to greatly improve the lives of its citizens when it can instead get flashy status symbols?

I wonder when Dubai will be targeted by Muslim extremists, if it hasn't already...

What are my thoughts?

closer to the edge

LMAO i cant stop laughing at this comment and then look at the picture of the tower...lol.

I can see this building from my bedroom window, i shit you not. ill take a pci when im back in dubai

Sovereign002;3812486It was only a matter of time before Dubai made the tallest building. They already have the tallest hotel. I think it's a nice feat to accomplish, does anyone know what the building will be used for?[/quote] the building will be apartments and offices [quote=Crazy Wolf;3812498]I wonder when Dubai will be targeted by Muslim extremists, if it hasn't already...

you may think what i am about to say is complete utter bullshit, but do your research it is not the UAE govorment used to and still does fund al queada, this was a oppenly talked about subject about 8 years back as terrorism has gotten worst the UAE govorment continues to pay al queada so they do not bomb/attack dubai. what most people do not know is that the majority of dubai buildings are invested by al queada, and theres nothing stopping them blowing up there own buildings, like they would fucken give two shits anyways.