It's Not Easy Being Green

ok i was watching the news and i saw people fleeing from hurricane katrina i saw 8 lanes (4 one way 4 the other) adn only 1 way was being used and it was bumper to bumber in these pics an videos so i started thinking WTF use 6 of 8 hell 7 of 8 or all 8 lanes to move ppl in the mandatory evac waht is wrong with with that so here is my question why not? wahts your thought on this 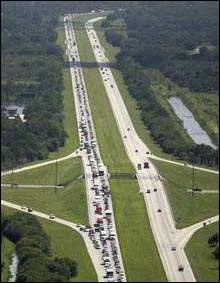 :ditto: You cant just start using the other direction lane to evacuate, thats just asking for major crashes. I'm more wondering why there are so many cars driving towards the storm.

lol...I guess you got your answer, huh?

There is a difference between an early evacuation and a emergency escape. If hurricane Katrina would be so close that people had mere hours or even less time to escape then I could see why you would take the risks (crashes etc.) and drive the other lanes. During a normal evacuation the clue is not to panic.

Seems to be a lot of other cars going the other way. I have a feeling most drivers don't want to return to their nightmarish dodgeball days when driving at a combined speed of 120mph or so. Besides, emergency workers need to get into those areas, changing the flow of traffic so drastically would have only created more problems.