There are plenty of nice B5 models in B5A2 --even a whole squadron of Starfuries flying together.

And there's a really nice pack of Star Wars fighters, Imperials and Rebels alike-- shouldn't be too hard for someone who knows how to 'port them with proper permission.

I would love to see the alien ships of Independence Day, and the Terran Federation fighters and dropships from Starship Troopers (a fully functional Rodger Young is one of the reasons I still watch this forum).

Also, there are some never-made fighter designs for various Trek games (the recently released Valkyrie model from Invasion notwithstanding). Weren't there fighters in Shattered Universe? And that game with the Ark Royal in it (no idea why it's eluding my brain right now)?

Hi, you received my message, I have found the model of the x-jet of x-men

Hah I was playing Shattered Universe earlier. "Defend the Excelsior" . It's a great game. I love the Bird of Prey in it and the Spectre mk III (I think its the Spectre, could be the Wraith or that other one lol) Starship Troopers...if I could find a decent picture of the ship from it I might consider it lol.

For something a little different, may I suggest the Empire of Human Duchies premier heavy fighters, the Imperial Courier and the Imperial Trader Imperial Fighters, Star Trek: Armada 2 Downloads, Star Trek: Armada 2 Other Although, really in most universes they would be treated as gunships, as they have a crew of 6-8 and carry a mighty 20mw or 100mw Beam Laser (can destroy a ship of less than 350 tonnes in a single shot) and up to 8 Missiles, which can be of varying types and complexity. The Courier (two engined) has a mass of 480 Metric Tonnes, and the larger Imperial Trader has a mass of some 700 Metric Tonnes. They are fitted with a Class V (Courier) or Class VI (Trader) Hyperdrive, giving them a maximum range of 15.62 and 15.42 Light Years respectively. The Trader is designed more as an assault transport, and has a main thruster accelleration of 9 Earth Gs, with retrothrusters producing 4 G. However the Courier is truely a fighter, with a 16 G Main Thruster and a 6 G Retro. However if you prefer single seat traditional fighters I do have an option. They are called either Airfighters or Light Fighters in Frontier depending on their original role, both types are fully capable of atmospheric flight, but Airfighters are generally not designed for deployment outside of a Star system, lacking the supplies and so forth for long ranged patrols, although there are specialised single seaters made for long ranged flights. Anyways, may I present the Empire of Human Duchies "Osprey" Airfighter and "Osprey-X" Light Fighter. 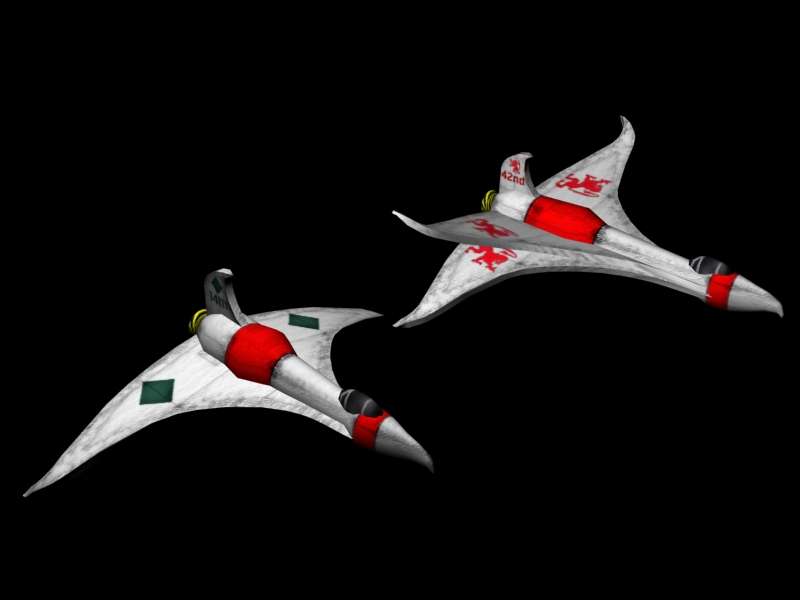 That is different. They look good though.

Ragnar;4175029Starship Troopers...if I could find a decent picture of the ship from it I might consider it lol.

I think I still have some reference materials in my old Parallel files.

That was too close

Majest;4175703I think I still have some reference materials in my old Parallel files.

That would help a lot, reference materials are often what decides whether a model can be made or not

Basically the model is done, all that needs improvement is the textures to produce a more realistic camouflage. And for those interested in poly counts, the A-1a is 386, the A-1a/R1 is 646 and the A-1a/U4 is 451.

starfox1701;4172908If anything goes than the baddest tie ever is the Tie Defender, with the Tie Avenger coming in a close second. Would love to see them.

I just found 'em again --they're in Star Wars Fleet Command. And they look as lovely as ever.