I have recently been looking for some Terran Empire ships for something I am going to be doing for myself after ImpSPCam is done. It suddenly occurred to me. Why are the ones available always an exact match for their Federation counterparts? Surely, there would be some minor external differences between USS Relentless and ISS Relentless other than hull markings, would there not? A few minor differences which when taken together make the ISS Relentless look, I dunno, nastier. Maybe the nacelles raked further forward and lower. Slightly longer, also. A steeper pitch to the curve of the primary hull so from bow on she looks as if she's frowning at you right before she slaps you out of warp. And whom decided the Terran Empire has the same ship classes Starfleet has? Look at the TMP-era Dreadnought class. Is it concievable the Terrans took this design and developed something quite different?

The other thing I've not been able to find is a good example of the Terran Starfleet's markings. One that I could use as a template for applying to more than one ship class. I'm not one for registries and numbers in A2 usually. I find it distracting to have seven to thirty USS Bellerophons running about in combat. But for Terrans, I may just make an exception

Well if you ar looking for markings like the ones in Enterprise look over in BC files and SFC files and Battleclinic. Theres a large list of ISS ships between the 3 sites and som have the big yellow pennets on them. As for the rest a bit of carfull movement of ship sections in milkshape might yeild the results you want but it would be a trile and error process.

yeah, porting new models would be fine too but you can retexture old models as well

i think the same way as thunderfoot006, Terran Empire ships shouldn't be exact the same as their fed counterparts. i made a Akula refit some time ago that is a bit different with heavier weaponry and a markings scheme i like much better than the Enterprise series Terran Empire scheme 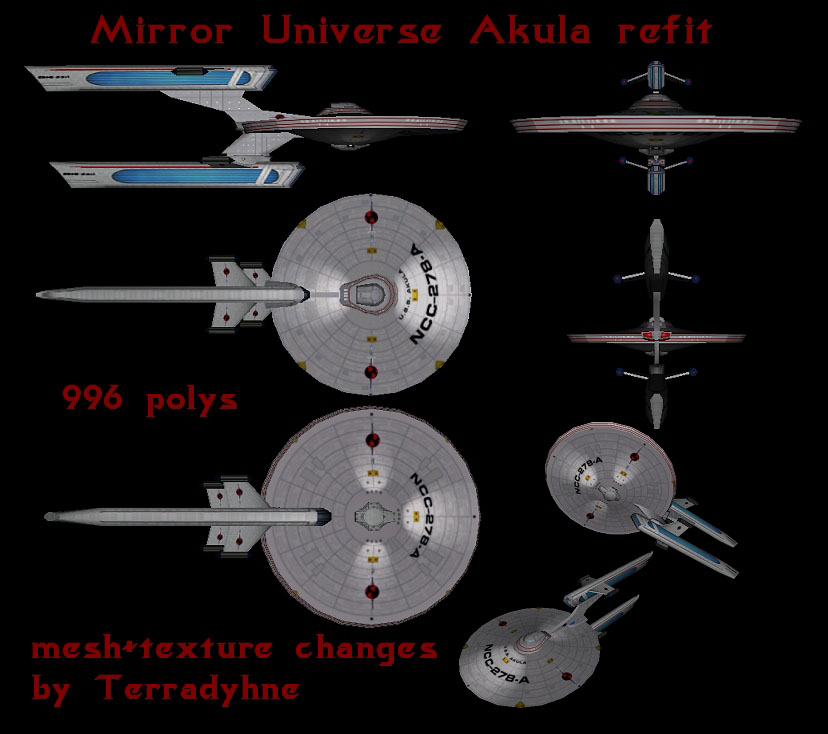 Thanks guys. I appreciate it. This is exactly what I am looking for. I have never made a model but this may just be the project that makes me start.