I tried an example script and edited a couple of do's and wait's, nav goals, as there are only six in my map.

I took those nav points from the borg map.

I'm not sure if the green long rectangle entities are the key to get a npc to walk. 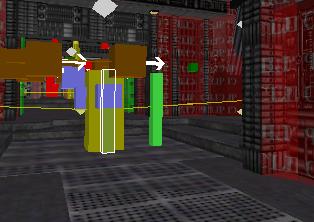 All seems a bit too complicated for me but have you read the documentation provided with the tools? Maybe these explain what the various elements are?

I've read it in the past.

I'm not sure. I'm editing the NX01 map, trying to do something with the Launchbay only, so no deck to walk around.

I was also thinking of just pasting in the entities from the examples maps I do have, and just hope for the best with it, use the voy1 map and try and edit what I don't need, since it is the only map where the crew of voyager is.

As for my custom map, there isn't much more I can do, since there is no info on how to get NPC's to walk around,  I tried two, three years back, I was considering on whether or not to recycle EF, as I have my Doom 3 up for recycled with a load of books.

But I just don't feel like removing software since I have these old systems still working.

I also focused on this, as the creator of the NX01 mod for a game engine, has disappeared. He said to me last year or well earlier this year, he could send the source files for me to try and give it ago at editing his mod.

How many modders are there for a game that is eighteen years old, not many, since people eventually remove their older systems.

The good news is, there are the maps files available on this site for small mod edits, that is the only way anything can be changed. I checked an old name on here, and I found the 'damaged_bridge.pk3 file

I tried to add the Erridian NPC but they don't load into the game's voy1 map which was the edited one I made more than a decade back, I don't know. The way EF missions work, should easily load in as the npc would simply load its spawn script, as there are no actual mission scripts available, only what the tour mod has. So, editing and testing what there is the only way to create small changes.

Pak 2, 3 contain the files, with 3 being the ones with the tour mod real_scripts folder, sounds, and model files.

So there is nothing else.

Last edited by efmodder 5 months ago

I have a small mod for the tour mod deck 01, here is the file simply replace the old pak3 file with the new one, and backup the old one. It has a few small changes, how ever they don't work entirely, but what does work is fine.

I tried uploading this to the site, but it failed, here it is via this link.Tour mod deck 1 small changes

I will check it out now for you.

"I tried uploading this to the site, but it failed" - would you be alright letting us know what difficulties you had? So we can fix them? Thanks!

I tried to upload the file, it never completed uploading. It seemed to be much quicker using the upload file service, the upload doesn't have a bar to show the progress of a download.

The error was something about uploading had failed. The image did upload but not at first, I had to restart it twice. Could it be I didn't give it more than twenty minutes to complete, I am not sure now. The uploading procedure does need a progress bar to at least give the indication of how long it will take to complete.