It is a correct model from the old BTLS3 YWing, this model has a two pilot cockpit with a ion gun turret. This turret on Foc has full movement.

thats pretty cool Nomada. you seem to like to make this stuff

Did you texturize it? Because its not bad, one thing I would change is the Engine caps, maybe make them aittle rounder? If your in to making Y-wings modifacations, it would be great to have a mod with this in it too...... the BTL A-4 Y-wing. 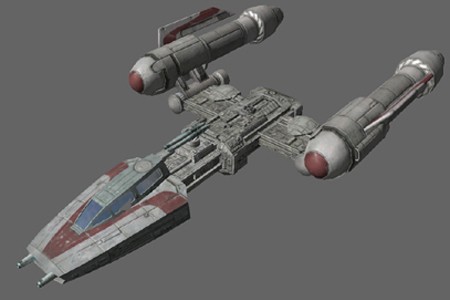 I got the picture from Wookieepedia [COLOR=black]NOTE: THIS IS NOT A MODEL FOR GAME IT IS A PICTURE, THATS IT.[/COLOR]

several errors in the modelsUnless the ones used in battle of yavin weren't S3, there was a grill on the back of the engine. The engines were pertty much parallel to the ship. these are attached diagonally. not right of what i have seen.

This is the original FOC model with some changes as the turret or different engine glows. I only have added this changes and coded it for use the turret. And I have done two versions from same model. One is a BTL S3 Ywing and other is the same model without ion turret, it has one laser turret.

Well EAW and FOC never were much on accuracy lol... good game though ^^