There should defo be Cybermen for the Empire. If any one can make a mod like this, It would make my day. Heres a pic of a cyberman: 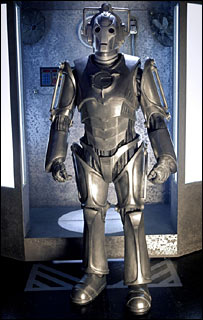 There wasn't such shit in SW universe, and it looks like from 70's movies robot....

It could be classed off as a Dark Trooper Phase I

Did you play Dark Forces 1 ?? The fisrt Star Wars FPS game?? If not then you should play and see how the Phase 1 did look... Furthermore, you can read some SW comics and see for yourself..

I said It COULD be classed off as a DTP1 don't you read?!

Theres note wrong with Cybermen. I just thought they could replace the StormTroopers, Cause there a bit same old.

no it cant be passed off as dtp1 because it look stupid, the phase 1 always scared the crap out of me because it always came out no where. besides aren't all 3 phases going to be in FOC when it omes out?

It shouldn't be passed off as anything. It's just a cyberman. There just like the Super Battle Droids from Ep2 and Ep3 only with heads and shiny silver armer, Plus they don't blow up so Easily.I just thought it would be good to have a new bread of Fighter. Plus a Machine with an arm cannon always gets a :thumbsup:

Final Thought. Will anyone make me a Cybermen Squad to replace StormTroopers. Yes/No