Today I have done it, a new TIE Tank created looking the Century tank - Wookieepedia, the Star Wars Wiki and some comics as Dark Empire or Crisom Empire.

Its close but not exact

Needs some smoothing.... and its really low poly so try and put some detail on it, and its also called a tie Crawler

Its close but not exact

Yes I know but I made it on one hour today. Probably with more time I will transform it.

I have added to it some of detail.

Err...You have done what? A TIE Tank has already been made and ingamed.

A TIE Tank has already been made and ingamed

I never have seen one TIE Tank with this type of tracks. On game you can see this model. 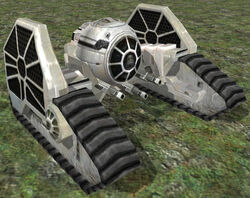 I'm talking about the exact same thing. One of the one you're speaking of was made for SOTE.

But if you are speaking from SOTE, it is not made and ingamed. Nobody can play SOTE.

And this model will be probably on FF this week.

We await our chance...

Its nice, but doesn't look anything like the Wookie entry.