Ok, me and Eclypse are working on a Venom model. And I'm going to be working on skinning it. But I can't find any decent pictures of Venom. Can anyone find any good ones. Possibly of him in Ultimate Spider-Man? I liked his appearance in that game, and I wanna skin him very much like that. And if someone could help out, that would be great. I need a few angles, Like the front, back, sides. And a few good headshots. Other than that, it's all I need. SESSH 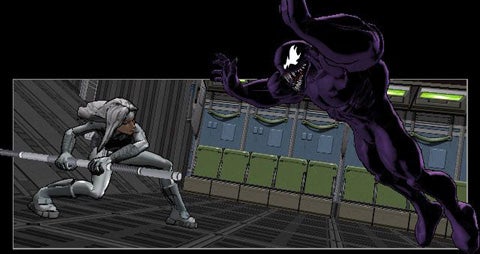 Amazing what Google Images can do.

So Venom does have claws! OK, just wanted to make sure.

I really don't have any business taking on a new project, so believe me when I say that this is the last one until others are finished. The only reason I took this on is because SESSH has agreed to skin my grunt. I kinda suck at skinning, so its a work trade off agreement. Frankly I think that if more people were willing to trade work, a lot more would get done around here, but enough ranting. I know you're all probably going to say that the torso and arm muscles needs to be bigger, but heck, just because it looks good in the comics, doesn't mean it will look good in JA. So this is what I've got for now, I wanted to wait until we got some pics up before I started on the head. I'll do what I can to make the fingers more claw like. Let me know if you guys think there needs to be some improvement with regard to the muscles, etc. I'll try to get a 360 up soon, just as soon as I can get some better lighting on this model. The back is huge, by the way, so no worries there.

P.S. - It seems to me that there are two options for the head. We can either make the jaw and teeth a 3D object, or we can skin it, I'm just not sure which one will work better in game. So some suggestions there might be helpful.

So I had a little time, so I decided to have a little fun:

Let me know what you think. Suggestions welcome.

You may want to refine that. The funky shading in that render suggest some sloppy polyflow.

and of corse the new movie venom

Inyri Forge;3556320You may want to refine that. The funky shading in that render suggest some sloppy polyflow.

Yeah, there are definitely some sloppy parts, no question. The one on the left is actually a profile before I Mirror Tooled it. The one on the right is post Mirror Tool. So I should just go back and refine the one side a bit more and then re-mirror. Thanks for the suggestion.

You should really just mirror as an instance. That way whatever changes you make to one side will be reflected onto the other side.

Well, XSI has this funny thing called "Duplicate/Instantiate". I haven't quite figured out how to duplicate the instances yet. However, I was able to work on it a bit and re-mirror (er...duplicate symmetry) the head and had some decent results. I'll post a screen when its cleaned up a bit more, as I still have some ridges from the mirror that need to be cleaned up (a la collapse/dissolve & clean). Do I need to throw a tongue in there? Never liked the damn tongue, even back when Todd McFarlane did Spiderman.