BBC NewsA teenage boy has been given nine years detention for raping an 11-year-old girl in a supermarket toilet. But how did the police track the boy down? The search for the youth who raped an 11-year-old girl in a supermarket toilet sparked hundreds of calls to a police incident room. But in the end, police were helped by the fact the victim twice spotted him while she was being driven around town by her mother. The girl, who cannot be identified, was raped in a toilet cubicle at a Sainsbury's store near Leamington Spa, Warwickshire, in March. The victim's mother, who can only be identified as Liz, told of how her daughter twice spotted him in town in the following fortnight. "We were in the car and she was just chatting away to me. She suddenly just stopped talking as we passed him and said 'did you see how he looked at me?'" "I knew what she was going to say so I turned the car round but by the time we got there he had gone.

When he was arrested more than one adult in his family group said yes, I immediately thought it would be him

Det Ch Insp Adrian Pearson "The second time she just shouted out 'there's the attacker again'. She said, 'are you going to stop the car?'" But Liz said she just carried on driving and reported the incidents to police. A 15-year-old boy, who cannot be named for legal reasons, was given nine years detention on Friday for raping the girl. Det Ch Insp Adrian Pearson said: "I want to say how brave she has been. She played a crucial part in identifying the attacker." He added, however, that he was sure a distinctive jacket the attacker was wearing would have helped them trace him. 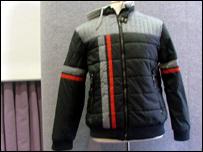 The attacker was found by his distinctive jacket The teenager, arrested on 29 March, was a very dangerous young man, the detective added. "We discovered a range of sexual dysfunction in his background, things he had done to people in a social group or in his family circle," Mr Pearson said. "None of it was reported to police but it points to the fact he was a very dangerous young man. "When he was arrested more than one adult in his family group said: 'Yes, I immediately thought it would be him'. "I make no comment about the fact that these people did not come forward to the police." 'Coolness of attacker' A reward had been offered to encourage people to come forward, but no-one would receive it, he said. The ferocity of the attack led Mr Pearson to assume the attacker would be an older person. "Because of the severity of the attack and the coolness of the attacker I really thought it would be someone older and more experienced," he said. "This person was very inexperienced which makes him more dangerous." 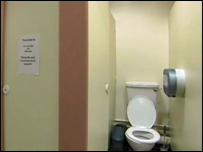 The girl was assaulted when she went to the store's toilet The youngster had carried out minor sexual attacks on women both before and after the rape, but police said they did not know why he suddenly carried out a vicious attack. "He had gone to the store to make purchases. He used the toilet and as he left he saw the victim going in. "On the spur of the moment he decided to 'do something sexual' with her. He was suddenly prepared to rape her in a short period of time." The girl's mother should not blame herself, he said. "It is every parent's worst nightmare. There is nothing a parent could have done. You can't wrap children in cotton wool and how could anyone know this would happen." 'Lost trust' Liz said she and her family were coping "day by day". "Now, I feel angry. How can someone of 15 take a child's confidence away," she said. "She was a bubbly, nice, active, confident girl. She had a lot of confidence and would go anywhere on her own. "Now she is not as bubbly. I think she has lost her trust in people." The pair still go shopping together although not as much to the Sainsbury's store where it happened. "I do blame myself to a certain degree. I keep asking if I could have been more careful. "I sometimes see people letting their children go to the toilet and I want to stop them," she said.

I feel sorry for that little girl, but I honestly think the kid should have got waaaay longer in detention.

geez, that kid should get far longer and maybe a few things cut off.

How did that boy get away with going into the girls restroom? That is so scary. We often think we are pretty safe in there. I think this 15 year old guy has a lot of problems and the longer you keep him away from society...the better it is. I was 15 two months ago. I can't believe he raped a 11 year old girl. It is unreal.

I agree, he needs to get a lot longer in there. That girl will never be the same, and it was all because of one messed up boy. It's not fair, the fact that he will be able to just walk away in a couple of years. :( And as far as the whole bathroom thing goes, once you think about it, they never have been very safe.

screamingbyegeez, that kid should get far longer and maybe a few things cut off.

Longer indeed. I hope he gets assraped during his stay. I really wish the justice system, both here and there would wake the hell up. People that commit crimes like that need to be locked away and if ever released to the public again they must have their junk lobbed off and a vagina sewed in. Send them back into the world as what they are, coward pussies.

They are just going to throw him in juvie, and he will prob get out on good behavior....

personally, they should beat him to with an inch of his life......let him get better, and do it again....

they should do that to ALL rapests

I would die without my life.

I'm not in hurry to see this kid free. Better lock him and loose the key.

PS: Was the picture of the toilet really necessary?

screamingbyegeez, that kid should get far longer and maybe a few things cut off.

No, he should be shot - like any animal. Does Britain still have the death penalty, or has that been declared "inhumane"?

PS: Was the picture of the toilet really necessary?

The media's a bunch of pricks who'd do anything for money, regardless of who they hurt.

Does Britain still have the death penalty, or has that been declared "inhumane"?

Yes. It's traumatizing to the poor little rapists [pats rapists]:rolleyes:.

I vote for neutering rapists found guilty. So what if they can't have children, then, big deal, adopt a kid when you have a relationship. And considering the fact that so many rapists go free and that it takes a miracle to get one jailed, there won't be too many innocents getting their crotch disabled either.

I can't believe he raped a 11 year old girl. It is unreal.

The worst thing I ever heard of was a six months old rape victim. That's unreal. Not to mention that it's so gruesome it leaves you numb.

Rape is horrific. It ruins the life of the victim, who'll never be the same again. Five of my friends have gotten raped, I unfortunately know what I'm talking about:(.

How did that boy get away with going into the girls restroom? That is so scary. We often think we are pretty safe in there.

It's really as simple as just prancing in there. Then when/if someone stops you, you just go "oops, wrong door".

I've seen it plenty of times - girls accidentally going into guys' restrooms and vice-versa. The problem is that 99,99% of the time it really is accidental, so it's not like you can punish them for doing it:(.

JillI can't believe he raped a 11 year old girl. It is unreal.

Just recently there was a thread about some parents who raped their 1 day old daughter. But in any case, rape is a very bad thing. I do strongly belive that the rapeists should undergo a forced sex change. But good luck getting that passed anywhere.