BBC Aids virus 'could be weakening' 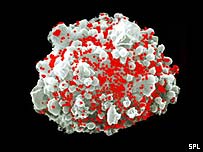 HIV may be modified by the immune system The virus which causes Aids may be getting less powerful, researchers say. A team at the Institute of Tropical Medicine, in Antwerp, compared HIV-1 samples from 1986-89 and 2002-03. They found the newer samples appeared not to multiply as well, and were more sensitive to drugs - some other studies argue they are becoming more resistant. The researchers, writing in the journal Aids, stressed their work in no way meant efforts to prevent the spread of HIV should be scaled down.

HIV is still a life-threatening infection

Keith Alcorn They were only able to compare 12 samples from each time period, and they were unable fully to tease out any effect that drug therapy may have had on the virus. Hope for future Researcher Dr Eric Artz said: "This was a very preliminary study, but we did find a pretty striking observation in that the viruses from the 2000s are much weaker than the viruses from the eighties. "Obviously this virus is still causing death, or though it may be causing death at a slower rate of progression now. Maybe in another 50 to 60 years we might see this virus not causing death." Keith Alcorn, senior editor at the HIV information charity NAM, said it had been thought that HIV would increase in virulence as it passed through more and more human hosts. But the latest study suggested the opposite is actually true. "What appears to be happening is that by the time HIV passes from one person to another, it has already toned down some of its most pathogenic effects in response to its host's immune system," he said. "So the virus that is passed on is less 'fit' each time. "This would suggest that over several generations, HIV could become less harmful to its human hosts. "However, we are still far from that point - HIV is still a life-threatening infection." Similar trend Dr Marco Vitoria, an HIV expert at the World Health Organization, said other diseases - such as smallpox, TB and syphilis - had shown the same tendency to weaken over time. "There is a natural trend to reach an 'equilibrium' between the agent and the host interests, in order to guarantee concomitant survival for a longer time," he said. However, Dr Vitoria stressed that the latest findings should not lull people into a false sense of security. "This kind of change cannot be adequately measured in years, but in generations," he told the BBC News website. He also questioned whether it was possible to draw firm conclusions from such a small study. Will Nutland, of the charity Terrence Higgins Trust, said: "This latest study adds to the debate on an apparently confusing and contradictory issue. "Some studies suggest recent strains of HIV are more sensitive to drugs while others claim strains are becoming more resistant. "The study adds to the body of evidence but HIV is showing no signs of dying out in the near future."

Well, it looks like it could half be good news.

On the other hand, its not exactly conclusive.

sounds like a great thing . but the viruses become quickly resistant so we shouldnt get our hopes up

Yup, as the article said though, they also have results to show that it is getting stronger.

Protection is the way forward!

Its not that they become persistant, per se.

The Human Immuno-deficiency Virus is a rapidly changing, maybe even evolving, virus. That is why there is no vaccine, there is no unversial antibody for the virus. Even worse, most people have a T-cell count that is extremely low, which is obviously part of HIV AIDS. T Cells, if I recall correctly, identify the virus as a pathogen, and then target other white blood cells at it to destroy the virus. Well, with no identification, antibodies can not be made fast enough or in large enough numbers. As much as it sucks, the chances of a vaccine or cure in the near future are very slim.

Evolution at work... Obviously the chance of reproduction (the infection of another host) is higher if the primary host does not die too quickly. On the other hand we may have even more HIV positive patients in the future. Many people also suffer from Hepatitis C and don't even know it.

Sounds promissing but it still could turn resistant so we shouldn't cheer before we reached the end of the line. Atleast it might give some hope and that is not a nad thing.

Back from the dead!

The only AIDs/HIV infected people I feel sorry for are 1. Kids that get it from their parents, and 2. Those who get it from a blood donor.

As for those that can't keep their pants on and get HIV/AIDs, I hope you suffer. :)

Ok, thats a bit over the top.

The people that don't know they have AIDS, or never take the test, they disgust me. The ones, and yes this has happened, who know they have aids and then sleep around to spread it, should be tried for murder and torture.

Not necessarily great news. When people start hearing that they might not have as much to fear, carelessness sets in. I just hope in the next few decades it's still treated as a deadly virus.

It should be getting weaker. Virus' are like parasites. A parasite that kills its host usually dies with it. The more successful a parasite is the longer its host lives. The same thing is probably happening with the AIDS virus. The successful strains dont kill as quickly or are not as serious, so those strains reproduce more because their hosts last longer. The ebola virus would be an opposite of this because it is not very successful and kills its host before it cant be spread very much. Virus' tend to get weaker the longer they are around. Remember the fever? 200 years ago it was fatal. Now today, with a few exceptions, it just makes you feel like crap.