Interesting BBC article about listening stations in the oceans which the US Navy doesn't like: BBC News - Sounds of the sea: Listening online to the ocean floor

What is more interesting though is the actual website where you can listen to clips from a few of these stations: Listening to the Deep Ocean Environment

From what I understand those aren't exaclty live feeds but delayed feeds which have been analyzed (and scrubbed as described in the BBC article). Still some interesting stuff there.

It seems a bit silly of the Navy. The concerns are understandable, but just how secret do they think they can keep their ships?

Well, I just found a new way to waste my time...I love the ocean as it is. Used to live in the Pacific Northwest...there's nothing else quite like the ocean.

Also, I got a kick out of this: 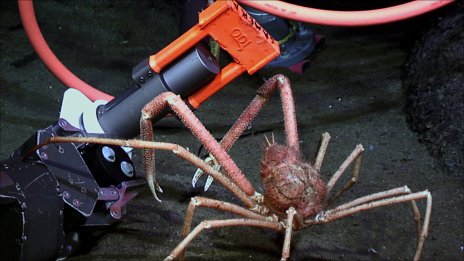 Crazy Wolf;5602423It seems a bit silly of the Navy. The concerns are understandable, but just how secret do they think they can keep their ships?

Surface ships probably not very much due to satellites, but if China/Russia knew all the locations of all US missile submarines (and I think that would be difficult without either a big fleet of very modern hunter/killer subs and/or an extensive underwater sonar system) that could seriously complicate things for the US.

Yes, but they're OK with allowing this for American scientists. How many of those scientists might be up for making a little extra money from the Chinese?

Keeping your strategic deterrent up to date has always been something you have to do every few decades. I remember they were talking about the difficulty of maintaining a strategic deterrent that could be checked for arms compliance decades ago; back in the 70s. I've got a documentary somewhere around....

US subs keep a database of the sounds of all known Russian and Chinese vessels. These sound files are detailed enough good SONAR operators can tell you sometimes which ship it is just by the sound signature.

If the USA has this ability the Russians and Chinese probably have it also.

Now take a audio recording, use a computer to scan the recoding in a wide range of audio frequencies within and outside human hearing. Add filters to remove unwanted noises and scan for signs or US warship sounds. Using multiple stations it would be possible to triangulate a position.

US and IIRC the UK spent lots of money developing SOSUS and now Russia and China can get it basically for free and with little effort.

If the ocean recordings are not "scrubbed" I can see the potential danger.