A simple yes or no will do.

He is a pedophile, murderer, and ran a child pornography and prostitution ring.

Did he finally get sentanced?

Did something happen to him recently?

He is a sick man, thats all that needs to be said, i hate child abusers!

this is the first i have heard of this, im suprised, this is rare. could sumbody fill me in on this "Dutroux"? Does he have a last name or is he like Cher and Madonna?

vivanolaqthis is the first i have heard of this, im suprised, this is rare. could sumbody fill me in on this "Dutroux"? Does he have a last name or is he like Cher and Madonna?

His name is Marc Dutroux and he abused several children: http://www.crimelibrary.com/serial3/marcdutroux/ http://news.bbc.co.uk/1/hi/world/europe/3661363.stm Dutroux victims return to cell Two young women who were held captive and raped by the alleged Belgian child killer Marc Dutroux have returned to the scene of their incarceration. 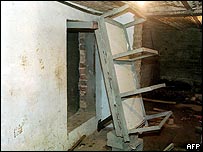 The secret cell was hidden behind a bookcase

Sabine Dardenne was 12, and Laetitia Delhez 14, when they were locked up in the basement of his house in 1996.

Mr Dutroux himself, as well as judges, lawyers, court officials and victims' families also went to the house.

Ms Delhez said she wanted to return to the dungeon-like cellar to help her "come to terms" with her ordeal.

Now 22, she insisted on being accompanied by her family, so "they can realise what I went through".

"I'm alright for the moment, I am very calm," she said, but it was reported her mother was taken sick during the visit and had to be carried to an ambulance.

Ms Delhez's and Ms Dardenne's appearance at the house came after they confronted Mr Dutroux in the courtroom last week during his trial for abduction, rape, and two murders.

Three others are also on trial.

Proceedings in the trial at a court in Arlon were suspended as two buses took over 100 people to Mr Dutroux's home in Marcinelle, 175 km (110 miles) away.

The two girls were rescued from the property when Mr Dutroux led police there following his arrest in 1996.

Ms Dardenne had been raped repeatedly while being held for 80 days, while Ms Delhez was imprisoned for six days.

Two eight-year-old girls, Julie Lejeune and Melissa Russo, apparently starved to death in Mr Dutroux's basement in 1996 while he was in jail for car theft, and were later buried.

Two others - Eefje Lambrecks, 19, and An Marchal, 17 - were killed in the same year, and their bodies unearthed from Mr Dutroux's backyard.

DUTROUX CASE 1993: Marc Dutroux freed early from child sex sentence. Soon after, girls start to disappear near his houses 13 August 1996: Dutroux arrested 15 August 1996: Sabine Dardenne, 12, and Laetitia Delhez, 14, found alive in basement of house 17 August 1996: Bodies of Julie Lejeune and Melissa Russo, both 8, found buried 13 September 1996: Bodies of Eefje Lambrecks, 19, and An Marchal, 17, are found 1 March 2004: Dutroux and other suspects go on trial More than 200 police officers were stationed around the house in Marcinelle to keep passers-by away.

The front door to the decrepit house had been removed and replaced by a light brown blanket.

Blue plastic covers were hung on the side of a nearby bridge to block the view. A helicopter that violated a flight ban over the area was chased away by police.

Mr Dutroux, a convicted paedophile, has admitted rape and kidnapping but denies the charges of murder. He blames his co-defendants for their deaths.

Mr Dutroux's ex-wife Michelle Martin, businessman Michel Nihoul, and drug addict Michel Lelievre are also on trial and have denied charges against them.

thnx, dont have time to go to the links now but l8r..... this dude is in jail right?

I would die without my life.

Marc dutroux is only the visible part of an iceberg. He's implied in a child abuser network but he's not the only one. There are important personalities who used this network. I think he's just a scapegoat. The real responsibles will unfortunately never be worried...

[Edit]Yes, he's in jail but his lawsuit is not finished yet[/Edit]

I pretend to do stuff.

sure know who the basterd is, they should lock him up and throw away the key.