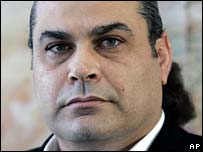 Mr Masri is seeking damages and an apology A man who says he was a victim of the CIA's alleged secret prisons is suing its former chief over torture claims. Khaled al-Masri says he was kidnapped in 2003 while on holiday in Macedonia, flown to Afghanistan and mistreated. His is a rare legal challenge to the US policy of "extraordinary rendition" - flying suspects to third countries without judicial process. US Secretary of State Condoleezza Rice said this week the US does not practice or condone torture. Human rights groups say extraordinary rendition is a violation of international law. The US maintains that all such operations are conducted within the law. The landmark lawsuit was filed by the American Civil Liberties Union (ACLU) in a district court in Alexandria, Virginia. It claims that former CIA director George Tenet and other CIA officials violated US and universal human rights laws when they authorised agents to kidnap Mr Masri. The lawsuit says Mr Masri suffered "prolonged arbitrary detention, torture and other cruel, inhuman, or degrading treatment". 'American values' Mr Masri, 42, a Lebanese-born German citizen, spoke at an ACLU news conference in Washington via a satellite video link from Stuttgart, Germany. He claims he was beaten and injected with drugs before being taken to Afghanistan and held for five months. 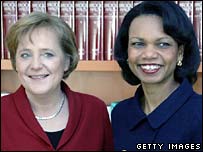 Chancellor Merkel said the US had acknowledged mistakes Mr Masri says that once there, he was subjected to "coercive" interrogation under inhumane conditions. Mr Masri is now seeking damages of at least $75,000 (£43,000) and an apology. The civil rights group says the government has to be held to account over "extraordinary rendition". "Kidnapping a foreign national for the purpose of detaining and interrogating him outside the law is contrary to American values," said Anthony D Romero, executive director of the ACLU. "Our government has acted as if it is above the law. We go to court today to reaffirm that the rule of law is central to our identity as a nation." 'No torture' The case was discussed earlier in Berlin by the German Chancellor, Angela Merkel, and Secretary of State Rice. Mrs Merkel said the US acknowledged making a mistake in detaining Mr Masri. While refusing to comment on the case directly, Ms Rice said the US sought to rectify any mistakes made. Both told reporters that intelligence work was an essential part of the war on terror, but should not break international law. Before she left the US, Ms Rice admitted that terror suspects were flown abroad for interrogation but denied they were tortured. She said suspects were moved by plane under a process known as rendition, and that this was "a lawful weapon".

It should also be noted that the CIA realized early on, it had the wrong man — but kept him in prison anyway. Mr Masri was kept in the primitive prison for more than a month after CIA director George Tenet was informed of the case, while officials tried to figure out a way to fix their mistake. Whatever happened to Mr Masri during his imprisonment, I think this is a good example why "questionable interrogation methods" should not be used on suspects in general. Let's see if Ms Rice will actually keep her promise to terminate "CIA Tours".

Before she left the US, Ms Rice admitted that terror suspects were flown abroad for interrogation

Uhm, why? Surely we do not have people so enept that they do not know how to ask someone questions. Well, of course the government isn't openly going to say something that could be somewhat incriminating.

US Secretary of State Condoleezza Rice said this week the US does not practice or condone torture.

Now I am really confused, what has all the controversy been about lately? The CIA openly states that it uses methods such as sleep deprivation, dogs, etc. to intiminate "detainees". Last time I checked those methods were forms of torture. :Puzzled: While I doubt he will be very successful, one can always hope.

Although I am not directly discrediting his accusations, he looks like the kind of man who views distreatment as not being given ice cold water and filet mignon on demand.

USMA2010Although I am not directly discrediting his accusations, he looks like the kind of man who views distreatment as not being given ice cold water and filet mignon on demand.

May I ask why? Because he wears a suit? Mr Masri is a common German car salesman and not exactly rich. This is another picture of him: His "crime": His name was similar to the name of a person the CIA was actually searching for. Mr Masri had no criminal record in Germany. Going on holiday and waking up in a prison cell in Afghanistan is something barely anyone would enjoy. Whatever else happened there.

see not all who end up in CIA secret prisons are terrorists.Hence I am against torture against terrorists suspects.don't care if someone like Zarqawi gets beaten to death.

This is a very good example to prove the points that have been made in previous threads. Not only does it show how the actions of the US affect innocent people, it also should shut up those who claim that those actions are none of the business of Europeans. It could be argued or course that Germany is a nice hideout for terrorists because the government seems to actually believe in liberal values, but I'd prefer if the CIA wouldn't fool around here anyway.

MephistophelesMay I ask why? Because he wears a suit? Mr Masri is a common German car salesman and not exactly rich. This is another picture of him: His "crime": His name was similar to the name of a person the CIA was actually searching for. Mr Masri had no criminal record in Germany. Going on holiday and waking up in a prison cell in Afghanistan is something barely anyone would enjoy. Whatever else happened there.

Although I do not disagree with the means by which the US is apparently getting its intelligence, I do think that proper checks need to be made to make sure we have the right guy. However, filing a lawsuit with the CIA isn't how this is going to be done.

It's the United States government, a single private suit isn't going to change anything.

If it gets enough publicity it will. If this guy, with a *seemingly* legitamite story doesn't speak out, what's going to change? He needs to make a large public uproar so that for the sake of their own PR and that of America, the CIA will hopefully do something.

A lawsuit might not mean that the CIA will change it's actions since a judge wouldn't be able to force the CIA in a change of policy based on one case. However public attention might see people in the parliament running for new proposals in a change of policy, which in turn would bring an end to any possible unjustifiable actions the CIA might doing.

No person can be held imprisoned without any form of trial, taking random "suspects" and intteroating and torturering them is unacceptable.

It's nice that they at least didn't kill him when they noticed the mistake. The German government should support him on this, or actually all of the EU, it's an unbelievable crime, and it should not go unpunished, albeit it probably will, at least if he doesn't get a lot of public support in the US, and why would he?

The guy looks a bit fishy, but that doesn't give CIA the right to kidnap him, they should follow the legal way if they wanted to interrogate someone, i.e. ask the German authorities. They wouldn't pick the wrong man I think, and if they somehow did, they wouldn't torture him...