Prime Minister is the central figure in government politics in most democratic countries, taking responsibility, blame and honor from the actions of his/her government.

But what kind of a leader Prime Minister should be? A determined caterpillar who pushes through hard decisions, possibly ignoring most of his government ministers and even popular opinion in the way, or, a diplomat who trusts on cooperation and cautious planning, possibly with an expense of administrative efficiency?

What's your view? What kind of Prime Minister/First Minister (etc.) you have in your country?

A mix of the both, The current english Prime-Minister, Gordon Brown, is a mix of the both; A good diplomat but determined to get things done no matter how long it may take.

After all the years with fat Göran,the answer is easy.:)

I guess our chancellor would be closest to a prime minister. The current government is a coalition of Socialists and the conservative People's party, with a socialist chancellor.

He's kind of a pushover though, not good at getting his way in decisions even though his party won the elections. Kind of a disappointment (though i didn't vote for him anyway).

What country are you from, when you don't know what country you're from few people know who you're talking about.

I Am Teh God

As much as I hated Fat Görans political views, I kind of liked his extremely ignorant, arrogant and rock-hard way of ruling.

If someone disagreed with him, they got fired from the goverment right away. Or got sent on a "embassy-mission" on the other side of the world:lol:

I see that Prime Minister should be a cooperative diplomat but still not a pushover. In multi-party democracies a cooperative leader is especially important in order to avoid government crisis due to PM's stubborn and one-way leadership. British Prime Minister don't have to cooperate as much due to one-party government but he/she still has to take into account other Ministers due to internal power blocs of the party.

The Finnish Prime Minister Matti Vanhanen is a cooperative diplomat though sometimes he seems to be a little bit pushover. He has done a good job and he's very popular PM as he's knowledgeable, factual and gray personality, giving aura of continuanity & security. Still at international media he's more known from his woman adventures than political achievements.

The leadership style depends much about the system itself too. In France it's president who is undisputed leader of the country and in Russia PM is just a pushover.

Disturbing Sam;3854607What country are you from, when you don't know what country you're from few people know who you're talking about.

Ah yes, I suppose I should mention that since not everyone remembers the years I had my location in my profile =p

I live in Vienna, Austria.

Helen Clark has ruled a pretty tight ship since 1999. 10 ministers have resigned, and several MPs have been kicked out. But at the same time, she's shown just how good she is - pulled together a stable government from unlikely partners three times in a row, seen the best coalition partner disintigrate, and overseen both strong economic growth and improvements in education and healthcare while passing extremely controversial laws.

And all whilst being highly uncharismatic and leathery. Like her or not, she knows how to rule. 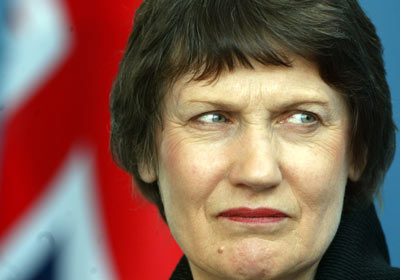 See, I'd go with "determined caterpillar", but I'd also like to have a smart brain in that one...