By Alan Levin, USA TODAY A New Jersey man was charged Tuesday under federal anti-terrorism laws with shining a laser beam at a charter jet flying over his home, temporarily distracting the pilots. 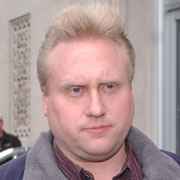 If convicted of anti-terrorism violations, David Banach of Parsippany, N.J., faces up to 25 years in prison and fines of up to $500,000.

By Mike Derer, APDavid Banach, 38, is the first person charged in a rash of recent incidents in which lasers were shined at aircraft around the country. Justice Department officials said they do not suspect terrorism in any of the cases, but said Banach's arrest shows how seriously they take the matter. "We need to send a clear message to the public that there is no harmless mischief when it comes to airplanes," said Christopher Christie, the U.S. attorney for New Jersey. Banach made an initial appearance in court Tuesday and was released on $100,000 bond. He was charged with interfering with a flight crew under the USA Patriot Act. He also was charged with lying to federal officers. The charges carry a maximum jail sentence of 25 years. Unrelated incidents of laser beams hitting planes have been reported in Medford, Ore.; Colorado Springs; Cleveland; Houston and Washington. Banach's attorney blasted federal officials for what she called an overreaction. "One would think they would want to devote their time and resources to prosecuting real terrorists, not people like my client," Gina Mendola-Longarzo told the Associated Press. She said her client was playing with his young daughter, using the laser's narrow green beam to point at stars and illuminating trees and neighbor's houses. FBI agents and police swarmed Banach's Parsnippany, N.J., home Friday night after a green laser was pointed at a police helicopter overhead. The helicopter was carrying a charter jet pilot who was attempting to locate the source of a green laser beam that hit his flight on Dec. 29 as it prepared to land at nearby Teterboro Airport. After being taken to an FBI office and given a lie-detector test, Banach said he had hit the jet with the beam, court documents say. During questioning by the FBI, Banach showed an agent his laser. After the agent switched it on, Banach warned him "not to shine the laser in his eyes because it could blind him," the court documents say. Lasers have become increasingly cheap and commonplace in recent years. Thousands of inexpensive lasers used for home repair jobs were sold before Christmas, some for as little as $15.

08'aIgnorance is not an excuse

*thinks on Nites thread and chuckles*

It sure didn't take long for somebody to do something stupid, now did it? This guy just ruined his entire life for doing something so foolish and stupid as this. I can't believe they caught him in his own home, though.

David Banach, not Terrorists. Unless david is a terrorist....hmm.....

I live in South Califorina, not New Jersey..it wasnt me! (lol)

I heard about this guy on the radio yesterday

He blamed his 7 year old daughter when the authorities busted in!!!!! :rofl:

I think that the FBI needs to use their discretyion better when dealing with situations like this. They need to worry more about the terrorists groups chillin in Idaho and down south with trainingh camps and shit.

Col Jimmy Emericshined the laser at a police helicopter[/QUOTE] :confused: [quote=Article]shining a laser beam at a charter jet flying over his home

I am the only one who is actually cooler than AzH

Saint, it is always helpful to read the whole article.