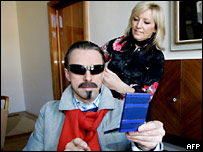 Pavel Bem posed as an Italian to catch out drivers with rigged meters Prague's mayor has had the chance to see for himself whether the many accounts of city taxi drivers ripping off unsuspecting tourists are true. Posing as an Italian visitor, in a fake moustache and sunglasses, Pavel Bem hailed a taxi for a short ride - and was promptly overcharged by some 500%. Mr Bem said he was shocked by the extent of the problem and has vowed to step up controls on taxi drivers. The undercover operation in the Czech capital was thought up by a newspaper. The daily paper, Dnes - which has been campaigning against overcharging - persuaded Mr Bem to dye his hair black, slick it back and put on a moustache, goatee beard and pair of expensive shades for his disguise. 'Outrageous overcharging' Once dressed as an "Italian", the mayor caught a cab for the 3km (1.8 mile) journey to Prague Castle. He found himself in a taxi with a rigged meter and was charged the equivalent of 26 euros ($34) for a trip which should normally have cost 4.3 euros. "Disguised the way I was, I was certainly expecting to be charged a higher price, but not to such an outrageous extent," Mr Bem said. 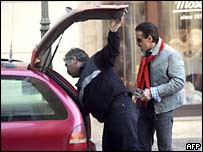 Drivers caught overcharging face a fine or could lose their licence "The driver deserves to be severely punished - I am putting the matter into the hands of officials at city hall." The cabbie could face a fine of up to 33,000 euros ($43,000), he added, and is in danger of losing his permit if caught re-offending. In another taxi, Mr Bem saw his fare shoot up by 200% when he asked if he could pay in euros, rather than koruna. He said more town hall staff would be tasked with going undercover to find cab drivers who were flouting the rules. Prague taxis have regulated meters but some drivers are said to have installed devices which speed the meters up to increase the fare. A German parliamentarian complained last year she had been overcharged during a visit, while most locals use only reputable minicab operators booked over the phone. Officials fear the city's notorious cabbies could put off some of the millions of tourists who flock to Prague each year, bringing valuable income. In the meantime, Mr Bem's advice for visitors is to agree a fare before getting in the taxi.

Wow, if I lived in Prague, he'd definitely get my vote. The cab problem must be pretty crazy if they need city officials to get involved in sting operations...... http://news.bbc.co.uk/2/hi/europe/4175143.stm

It's refreshing to see an elected official actually go out and get his hands "dirty".

Ensign RilesIt's refreshing to see an elected official actually go out and get his hands "dirty".

atleast their mayor is trying to save people money unlike my mayor :( http://www.gamingforums.com/showthread.php?t=170844

:lol: i actually find that quite funny...

A new sense of nuisance.

so they are the same everywhere in the world ,lol

I wish my city had a mayor like him. Stupid politicans, all they care about is their career.

I don't think I've ever heard of anything like this before, untill now. If you live in Prague, you're lucky.

colonel_bob:agreed I don't think I've ever heard of anything like this before, untill now. If you live in Prague, you're lucky.