By STEVEN R. WEISMAN Published: September 28, 2005 JIDDA, Saudi Arabia, Sept. 27 - The audience - 500 women covered in black at a Saudi university - seemed an ideal place for Karen P. Hughes, a senior Bush administration official charged with spreading the American message in the Muslim world, to make her pitch. Skip to next paragraph 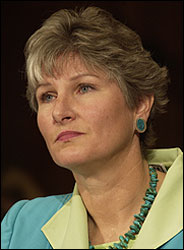 Karen P. Hughes, the under secretary of state for public diplomacy, was hired to publicize American ideals in the Muslim world.

Personally, I think the Saudi women are wrong about issues like voting. If you were to ask a group of lifelong slaves about their conditions and they said it was favorable, would that then make slavery OK? I don't think so, but it's all they know.

I suppose they can feel how ever they want to. But, it really shouldn't come as any surprise that they do feel that way after being repressed for so many generations there.

My personnal opinion is that they will ask for more rights when they will want them. We have no right to tell them what to do and not do, since different societies mean they have different values, desires and aspirations than us. Eventually, muslim womens will reclaim more rights, just like here, but it will take time before they are ready to do so. I think the samething applies for democracy.

But, it really shouldn't come as any surprise that they do feel that way after being repressed for so many generations there.

Christian womens were ''repressed'' too not so long ago.

If you ask me we should just leave them alone, if they are being supressed and they dont mind then fine let them, its not our culture so we should not interfere, but if they do ask for help then fine, help them. I do think that the muslims should do the same with us, leave our culture and our traditions.

ObliviousPersonally, I think the Saudi women are wrong about issues like voting.

But you are not a Saudi woman and therefore your argument holds no water. ;)

that just goes to show that we intervene fro what "we" think is right, not what "they" think is

Exactly Grizzly, and that is one of the things I have found wrong with people saying that their culture shouldn't do it 'that way'; The Saudi women will move for their rights, when they want them, on their terms, not ours.

It is how our society did it.

The less active women thing is their culture, and I think that if there is one thing we as a world internationally need to learn to respect; it would be different cultures.

Lord AbrarurRepressed for so many generations? Evidence please. I guess you think Islam degrades them. So alright for many generations. Can you show me evidence? I would be most happy.

By western standards, they are repressed. They have no voice in their government. All western women do. They can not dress in a manner of their own choosing. All western women can. They are treated largely as inferiors to men. Western women are not. If a women in the west gets raped by a man, she goes on Oprah, seeks criminal justice, and sues her attacker. If a muslim woman is raped, they are stoned to death.

This last site is very biased, but has an interesting video. Just watch the movie, even NiteStryker couldn't believe the rest.

Read this, and look at the pictures. With them are key quotations of the Koran. You will not find anything like that in the Holy Bible or Torah.

"Men are in charge of women, because Allah hath made the one of them to excel the other, and because they spend of their property (for the support of women). So good women are the obedient, guarding in secret that which Allah hath guarded. As for those from whom ye fear rebellion, admonish them and banish them to beds apart, and scourge them. Then if they obey you, seek not a way against them. Lo! Allah is ever High, Exalted, Great." Quran 4:34

She was flogged with 86 slashes before being hanged in March, 2001. Her crime was having an affair in the Islamic Republic of Iran. (Holy Crime report)

"If any of your women are guilty of lewdness, take the evidence of four (reliable) witnesses from amongst you against them; and if they testify, confine them to houses until death do claim them, or Allah ordain for them some way. Quran 4:15

This Iranian young man recieved 86 lashes for holdings hands with his girlfriend in March, 2001.

"The woman and the man guilty of adultery or fornication,- flog each of them with a hundred stripes: Let not compassion move you in their case, in a matter prescribed by Allah, if ye believe in Allah and the Last Day: and let a party of the Believers witness their punishment." Quran 24:2

"Last week the Saudi regime conceded the existence of an intelligence survey it had conducted last October of educated Saudis aged between 25 and 41. The New York Times, which disclosed it, said it concluded that 95% supported Bin Laden." (Guardian Unlimited, January 31, 2002)

Do you get our point of view now?

If they wanted to be liberated they would've asked.... you know like China.....

ultimately they don't see how there culture is so bad....(I don't think its right to woment) so if they like let'tem have it...

(I've always known the muslim point of view...There governments would kill us all if they had the opprunuity... We're known as infedels or unfaithfuls...and will be clensed from the earth...

The differences....They take an active role in the clensing rather than letting that be up to god...Peacefull my foot..)

(I've always known the muslim point of view...There governments would kill us all if they had the opprunuity... We're known as infedels or unfaithfuls...and will be clensed from the earth...

The differences....They take an active role in the clensing rather than letting that be up to god...Peacefull my foot..)

You'd Be surprised, Most of Islam is A very peacful religion, and most of the women know how it works here, and are happy, not having it that way.

It is not our place to call them wrong for that.