http://www.theglobeandmail.com/servlet/story/LAC.20061111.WORLDREPORT11-6/TPStory/TPInternational/Europe/ Not a surprise - we already knew Spain has gone off the deep end. In America, the man on the road sign is always white. omgz racism!:rolleyes:

How much room does this t 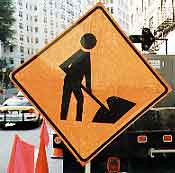 Pretty soon they will be banning "white" cups, and "black" spoons, etc...

:lol: In making the road signs non-sexist, they're making them sexist against men. :p

Bunch of crap. They should leave them the way they were. I have never seen them as "sexist" And Im sure that no women I know think so either.

^ One of the many reasons,I hate the EU,feminism,and women's unlimited freedom.

Ridiculous. Do they actually get people complaining that the signs are sexist? Who would care about something so obscure? It's what the signs say that matters, not how they say it.

Ridiculous... Anyway, wouldn't it be easier if Spanish women started wearing trousers instead of changing the roadsigns? :p

Emir Al-Aziz;3355900^ One of the many reasons,I hate the EU,feminism,and women's unlimited freedom.

Care to explain why freedom for both genders is a bad thing? :uhm:

I've thought that there are a number of signs around the public that are also sexist but I just didn't wanna mention it, but now that complaints are in the air.

(what are they implying that only women take children to school)

(this sign is so very sexist, it is telling the men of the public that they are not allowed to go inot the toilets, outrageous.)