No, thats a different project. Look at my drawing again. Here is what you are talking about: 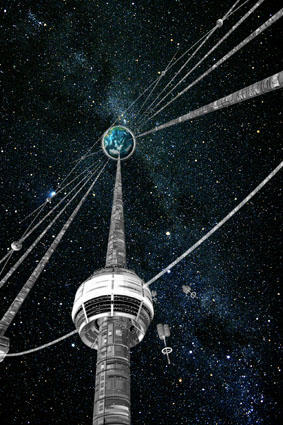 Here, found this info here:http://www.treitel.org/Richard/rass/stalk02.html >My guess is that the likeliest place for breaks would be the 1000 km >nearest Earth (more and faster orbital junk, more ionised gas, etc.), >so the part that fell to Earth would be short and quite thin. Also, >this part *would* fall almost vertically. A quick BotEC suggests that >a break at 1000 km would result in the broken end arriving at ground >level some eight minutes later, at a speed of up to 4 km/sec, about 25 >km east of the anchor point. Several comments: - Rational space elevator design given the earth orbit debris environment is a damage tolerant one. This means a minimum of six cables in a hexagon pattern, spaced a least a couple of hundred meters apart (i.e. several times the width of the Space Station - the largest piece of 'debris' that is in Earth orbit). The hexagon pattern ensures that no single object can take out more than two cables at once. Of course you design to take the loads with only four out of six cables left, and cross-connect the cables every so often (say every 10 km) to distribute loads around a break. That way you can take several hits at different locations along it's length. You also have a 'spider' that can crawl up and down the structure removing broken strands and replacing them with new ones. - Minimum weight design has a tower going up from the ground meeting a cable hanging from orbit, with the same taper ratio from ground to top of the tower as from GEO (if that's where you reach to) to the bottom of the cable. If you cut the structure where the tower and cable meet what happens is - nothing. The present strength of carbon fiber composite is about 40% in compression compared to pure fiber in tension. So the strength required for a 'GEO elevator' is reduced by about 29%. - For a structure that makes economic sense, you have to transport enough cargo to pay back your investment. For example, if you need to earn 10% return to pay off your construction loan, and you can lift one cargo an hour, you can make some estimates on the maximum mass of the structure. At 10% return, you have 10 years to earn back your cost. There are 87,660 hours in that time, so you can lift 87,660 cargoes. Assume that your structure cost $100/kg, and you also charge $100/kg to deliver cargoes. Then your structure may mass at most 87660 times the cargo weight. If we divide the structure into a tower and cable, each may mass 43,830 times the cargo. Taking the natural logarithm, we get a figure of 10.7 scale lengths for each. The Earth's gravity well is equivalent to 1 gee x 6375 km. This, given the 40% factor for compressive structures, means that 6375/1.4=10.7 scale lengths. Therefore the required scale length is 425 km. Existing carbon fiber has a theoretical scale length of 382 km. Allowing for a maximum of 60% of theoretical strength as allowable stress, 25% overhead structures, and the 4 out of 6 cable damage tolerant design, we get a useable scale length of 122 km. Therefore we need a factor of 3.5 increase over current materials (3.5 million psi vs 1 million psi). - Finally, a full space elevator is not required. You can build a structure in Earth orbit that is vertical, but shorter than GEO. The bottom end will move slower than orbital velocity, reaching zero velocity as the length gets to the full GEO size. Any reduction in the job a launch vehicle has to do is very useful, and a partial elevator can be built with today's materials. Dani Eder

vladtemplarNo, thats a different project. Look at my drawing again. Here is what you are talking about:

I know what I was talking about. Although I envisage it implemented somewhat differently to that.

I've looked at your illustration. I assumed those were meant to be there to illustrate zero elevation. It's not practical to do that, it just isn't practical at all. You cant go dipping things in and out of the atmosphere, just think of the airspace it would take up, and the stress that would be put on the tendrils, and the difficulty of mounting a constantly moving target and the fact that not being fixed to or supported by anything it would eventually pull itself out of orbit. (and so on)

You might be right. Thats the idea I had in my head. Regardsless, it is such an expensive project that it is immpossible to do unless all the first,second world countries worked on it together, and there was a great need for it.

Anyway, what do you think of using electro-magnetic cannon to fire objects like sattelites into orbit, or firing radioactive substances out of Solar system or into the Sun?

There's nothing really against EM cannons as a basic principal provided you can insure the integrity of the payload under those sort of Gs. I don't think we should fire radioactives out of the solar system or into the sun, they're still a source of energy.

I think firing them out of Solar system is a better solution than burrying them in the ocean or in the mountains. Don't you agree?

The One, The Only

you missed the point, he said its better to recycle them and use them for energy then to dispose of or mistreat it.

Yeah, and then the Intergalactic Environmental Protection Agency will be on our asses