This thread is for true spam, not senseless crap that fills this forum so much today, I plan to update it whenever I feel like it really, here you will find funny videos, random crap off the internet, pictures, jokes, everything. This is somewhat similar to B@SE's thread. But he is gone now, and no point bringing that thread back up.

Here we go; First off, some idiots!

Idiot # 1 I am a medical student currently doing a rotation in toxicology at the poison control center. Today, this woman called in very upset because she caught her little daughter eating ants. I quickly reassured her that the ants are not harmful and there would be no need to bring her daughter into the hospital. She calmed down, and at the end of the conversation happened to mention that she gave her daughter some ant poison to eat in order to kill the ants. I told her that she better bring her daughter into the Emergency room right away. Idiot # 2 Seems that a year ago, some Boeing employees on the airfield decided to steal a life raft from one of the 747s. They were successful in getting it out of the plane and home. When they took it for a float on the river, a Coast Guard helicopter coming towards them surprised them. It turned out that the chopper was homing in on the emergency locator beacon that activated when the raft was inflated. They are no longer employed at Boeing. Here's your sign guys. Don't get it wet, the paint might run.

Idiot # 3 - A true story out of San Francisco A man, wanting to rob a downtown Bank of America, walked into the branch and wrote "This is a stick up. Put all your muny in this bag." While standing in line, waiting to give his note to the teller, he began to worry that someone had seen him write the note and might call the police before he reached the teller's window. So he left the Bank of America and crossed the street to Wells Fargo. After waiting a few minutes in line, he handed his note to the Wells Fargo teller. She read it and, surmising from his spelling errors that he wasn't the brightest light in the harbor, told him that she could not accept his stickup note because it was written on a Bank of America deposit slip and that he would either have to fill out a Wells Fargo deposit slip or go back to Bank of America. Looking somewhat defeated, the man said, "OK" and left. He was arrested a few minutes later, as he was waiting in line back at Bank of America. Idiot # 4 A motorist was unknowingly caught in an automated speed trap that measured his speed using radar and photographed his car. He later received in the mail a ticket for $40 and a photo of his car. Instead of payment, he sent the police department a photograph of $40. Several days later, he received a letter from the police that contained another picture, this time of handcuffs. He immediately mailed in his $40. Idiot # 5 Guy walked into a little corner store with a shotgun and demanded all the cash from the cash drawer. After the cashier put the cash in a bag, the robber saw a bottle of scotch that he wanted behind the counter on the shelf. He told the cashier to put it in the bag as well, but the cashier refused and said, "Because I don't believe you are over 21." The robber said he was, but the clerk still refused to give it to him because he didn't believe him. At this point the robber took his driver's license out of his wallet and gave it to the clerk. The clerk looked it over, and agreed that the man was in fact over 21 and he put the scotch in the bag. The robber then ran from the store with his loot. The cashier promptly called the police and gave the name and address of the robber that he got off the license. They arrested the robber two hours later. Idiot # 6 A pair of Michigan robbers entered a record shop nervously waving revolvers. The first one shouted, "Nobody move!" When his partner moved, the startled first bandit shot him. Idiot # 7 Arkansas: Seems this guy wanted some beer pretty badly. He decided that he'd just throw a cinder block through a liquor store window, grab some booze, and run. So he lifted the cinder block and heaved it over his head at the window. The cinder block bounced back and hit the would-be thief on the head, knocking him unconscious. Seems the liquor store window was made of Plexi-Glass. The whole event was caught on videotape.

Idiot # 8 Ann Arbor: The Ann Arbor News crime column reported that a man walked into a Burger King in Ypsilanti, Michigan at 12:50 A.M., flashed a gun and demanded cash. The clerk turned him down because he said he couldn't open the cash register without a food order. When the man ordered onion rings, the clerk said they weren't available for breakfast. The man, frustrated, walked away.

Please note that these people are allowed to vote!

Two hunters from Michigan (true story) This is from a radio program, a true report of an incident in Michigan: A guy buys a brand new Lincoln Navigator for $42,500 and has $560 monthly payments. He and a friend go duck hunting in winter, and of course all the lakes are frozen. These two guys go out on the lake with the guns, the dog, and of course the new vehicle. They drive out onto the lake ice and get ready. Now, they want to make some kind of a natural landing area for the ducks, something for the decoys to float on. In order to make a hole large enough to look like something a wandering duck would fly down and land on, it is going to take a little more effort than an ice hole drill. So, out of the back of the new Navigator comes a stick of dynamite with a short, 40-second fuse. Now these two Rocket Scientists do take into consideration that they want to place the stick of dynamite on the ice at a location far from where they are standing (and the new Navigator), because they don't want to take the risk of slipping on the ice when they run from the burning fuse and possibly go up in smoke with the resulting blast. They light the 40-second fuse and throw the dynamite. Remember a couple of paragraphs back when I mentioned the vehicle, the guns and the dog? Let's talk about the dog: A highly trained Black Lab used for RETRIEVING. Especially things thrown by the owner. You guessed it, the dog takes off at a high rate of doggy speed on the ice and captures the stick of dynamite with the burning 40-second fuse about the time it hits the ice. The two men yell, scream, wave their arms and wonder what to do now. The dog, cheered on, keeps coming. One of the guys grabs the shotgun and shoots the dog. The shotgun is loaded with # 8 buckshot, hardly big enough to stop a Black Lab. The dog stops for a moment, slightly confused, but continues on. Another shot and this time the dog, still standing, becomes really confused and of course terrified, thinking these two geniuses have gone insane. The dog takes off to find cover, under the brand new Navigator. ----BOOM!---- Dog and Navigator are blown to bits and sink to the bottom of the lake in a very large hole, leaving the two idiots standing there with this "I can't believe this happened" look on their faces. The insurance company says that sinking a vehicle in a lake by illegal use of explosives is not covered. He still had yet to make the first of those $560 a month payments! And you thought your day was not going well? 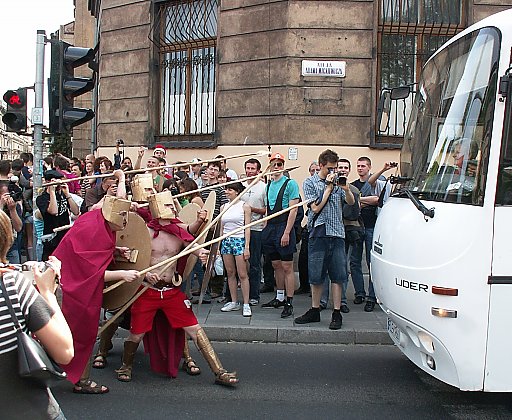 Will It Blend? Someone posted this a while back. But I feel it deserves a place here too. Hilarious stuff.

How to get a free meal from McDonald's. What this guy does is more or less stealing, but I found it funny.

That's all for now, I'll post some more later tonight.

I didnt read it.

Then you essentially defeated the purpose of using forum. Way to go dumbass.

I will keep Milo's thread alive.

This thread is now under my protection. All who disobey will be shot. Survivors will be shot two more times for good measure.

I loved the idiot jokes :lol:

Nice stuff Milo, I'll dig through google and see what I can find :) .

Thanks guys :) Feel free to add what you wish, in the name of REAL spam!

Milo;3824068Then you essentially defeated the purpose of using forum. Way to go dumbass.

Clockwork Arachnid. A pretty cool invention by Cazouillette over at the BrassGoggles forums.

The World without Us. Ever imagined what would happen to the planet if all humans were to disappear right now? Here's an answer.

I could be wrong.. but judging from this guys hat. I don't think he'll make it.

How Gullible are We? This is an article I found some time ago, really reflects on humanity. But then again, depends how you portray things.

A student at Eagle Rock Junior High won first prize at the Greater Idaho Falls Science Fair. He was attempting to show how conditioned we have become to alarmists practicing junk science and spreading fear of everything in our environment. In his project he urged people to sign a petition demanding strict control or total elimination of the chemical "di-hydrogen monoxide."

And for plenty of good reasons, since: He asked 50 people if they supported a ban of the chemical. The title of his prize winning project was, "How Gullible Are We?"He feels the conclusion is obvious.

And to finish off tonight; some high speed bullet photography.