This map works in Conquest, Co-op, and Single Player mode.

Description: This map is a jungle map with thick fog. It will support a ground war as well as a helicopter air war. There are seven control points including a main base for each side. You must control 3 out of 5 control points, plus your main base to force a ticket bleed. Also each side has a ZSU and a portable spawn point.

Loading Screen graphic is from an original artwork by Norm Bergsma. This graphic is copyrighted and cannot be used anywhere else without Norm's permission. You can visit his site at www.incountryart.com.

Finally, feel free to visit 1st Veterans Battalion at www.1st-vets.us. We are a group of active and retired Veterans from all over the world.

Problems: This map has been thoroughly tested and works very well. If you should happen to find a problem, feel free to contact me with a thorough description of the issue.

Screenshots
Comments on this File
1 month ago by Whiterabbit-uk

There are two versions of this map.  The one downloaded  via this link  is not the  original map quoted  in the description, but an edited version by Wong Hung Low (though the read me that is included  gives a different email name. In this map  the    bend in the river part of the  map had been changed so that instead of a bend in the river, you  get the river  backing up on itself in a circular fashion.  (You can still see where the original river bed  went).

While the map is loading,  it gives some information  that implies the map would be called Riverbend river patrol, where the opposing forces include  Riverbend patrols vs the Vietcong Air Troop Transport.  The 'south western'  spawn point  on the edge of a small clearing among the jungle has a single  Huey  spawn; plus,  an equipment  box; unlike the original.

In the original by (1VB) Hunter of the 1st Vietnam Battalion  this  SW spawn point is an army base with   Huey,  Attach chopper and  twin rotor transport chopper as well as tanks, artillery, mobile artillery and transports . Also the  river  has a proper bend in it;  (see  the first  map image below) 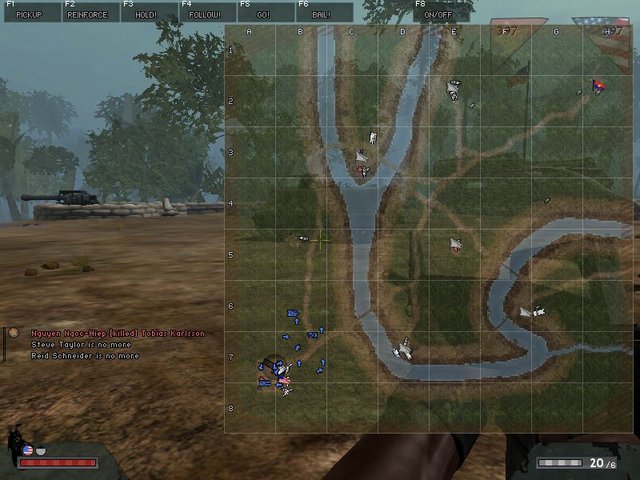 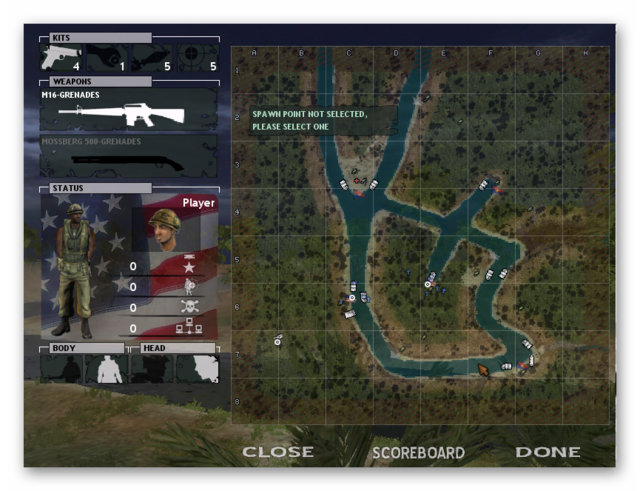 The  non original 'edited' version unpacks to an executable and read me that tells you where the installer  will install the map to.

The  map  plays differently to the original, so IMO is worth having; especially if you love Battlefield Vietnam.

There are some minor bot issues on both maps; with bots  hanging around. The more  bots you have set e.g. 64 bots, the more bots  seem to be stationary.  That said, both maps are  still playable.