PEGI, the rating classification board for video games in Europe, made a major faux-pas yesterday when they accidentally revealed that Call of Duty: Modern Warfare 2 is getting a remastered release, most likely this coming year.

It seems the error came about as the entry had a release date of 28/02/2019, which may have been a prospective release date at some stage. The entry only makes mention of the PS4, also, although hopefully it's not an exclusive to that platform (although it may very well be released on PS4 first, or have exclusive content, given Sony's exclusivity deal on the franchise). 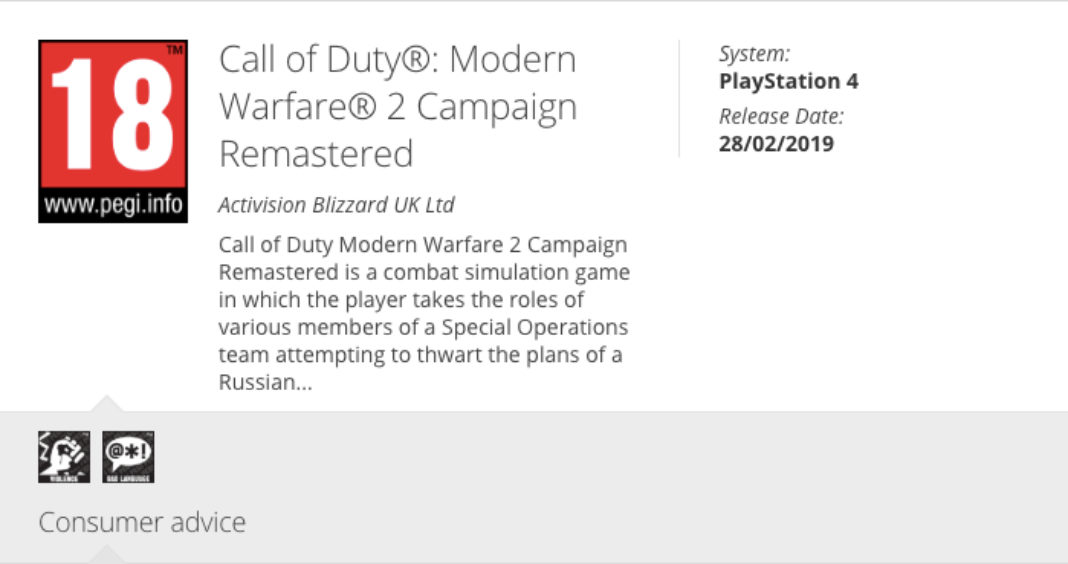 So while there's not much else to go on at the moment, it does seem logical that, given the game is now likely to exist, it will release this year. The original was released in 2009, so this would mark the 10th anniversary of the game. Given it's long-standing reputation as the gold standard of the series, it seems to make sense.

Hopefully this new remaster gets a bit more love and attention than the previous ones, which have been dogged with performance issues and bugs.

Stay tuned to GameFront for more on this as we get it.

This is really just going to exist as a cashgrab on the nostalgia of people who played this game when they were like really young. And really, I don't understand the appeal of this game, the campaign makes no sense and has nothing on the original and the multiplayer is so broken that I just don't get it. I don't find a game fun when I have to deal with a lot of BS and use said BS just to play decently.

The nuke scene has a lot more emotions than some shock value "can't even kill the bad guy" mission, seriously why couldn't my character just kill Makarov and his men from behind?