Fallout 76 is getting a new reputation system with the upcoming Wastelanders update, which adds NPC's to the game officially for the first time, and will see players siding with settlers or raiders, something that has been absent so far from the online version of the Fallout universe.

There's nothing really new or revolutionary about it, except for the fact that it's a welcome addition to the game. You'll start off with no reputation with either of the two factions, and you'll have to work your standing up within each community in order to be able to start quests and earn their trust. 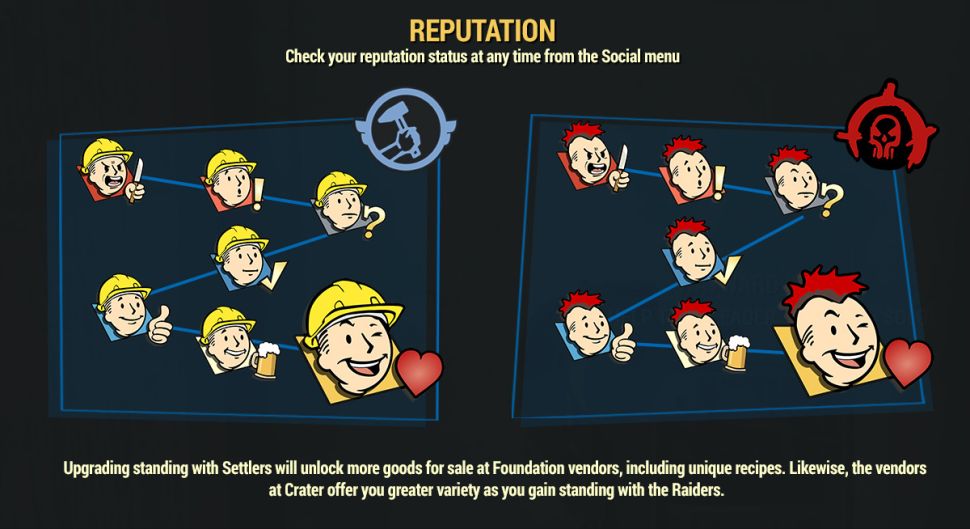 The thing is of course, helping one faction will lower your reputation with the other. The more you help one faction, for example by taking down enemies, completing quests and helping them with information, the more reputation you'll gain with them.

The more you do to help a faction by offering information, taking down their enemies, and completing quests, the more you will prove you’re someone they can rely on and your reputation with that faction will increase. Eventually, you will rise through seven different reputation 'ranks', from Hostile or Cautious, to Neutral, Friendly, and Ally, among others.

You'll be able to get extra goodies from vendors within a faction you're in favour with, too, as well as exclusive faction items.  As for the other faction, well, it's unclear just how hostile towards you they'll become, and if it means you'll never be able to regain their favour.

Regardless, this sounds like it'll add some interesting new dynamics to the game, even if it is something every other Fallout game has had since Day 1 (Well, except Fallout 4 arguably, but that's another argument for another day)