Published by GameFront.com 9 years ago , last updated 2 months ago

Amongst the PC gaming crowd in Europe, Roccat is already a household name. The brand is starting to gain traction in the U.S. as well, especially over the last 12 months, thanks to its Isku line of keyboards and Kone gaming mice. I’m not a fan of the staggered release cycle (products in Europe being available months before North America), but its offerings are well-built, thoughtful, and you can tell there’s a passion for PC gaming behind it all.

Roccat brought a new line of mechanical gaming keyboards to CES 2013, dubbed the Ryos. Three models will be available this April, with the flagship Ryos MX Pro garnering the most attention. The MK Pro, priced at $149.99, has many of the same design cues and features found in the Isku line, but with some serious upgrades. For starters, customers will be able to choose between four different kinds of MK Cherry switches — Red, Black, Brown and Blue — so no mechanical keyboard fan will be left out in the cold. The MK Pro also has individually lit keys, forgoing the now-popular zone lighting, so there’s a deep level of lighting customization. The other usual high-end keyboard features are there, too, including two 32-bit ARM processors (one for the board, one for the lighting), USB and audio ports, cable channels underneath the board, and up to 500 different macro button settings (thanks to the three Thumbster profile buttons).

Two other Ryos keyboard models will be available, so there’s a Ryos for every price range. The $129.99 MK Glow drops one of the 32-bit processors, the mechanical switch choice (it will likely ship with Red or Black switches), as well as the individual key lighting (just on or off modes here). The baseline $99.99 Ryos MK has no lighting to speak of, unfortunately. 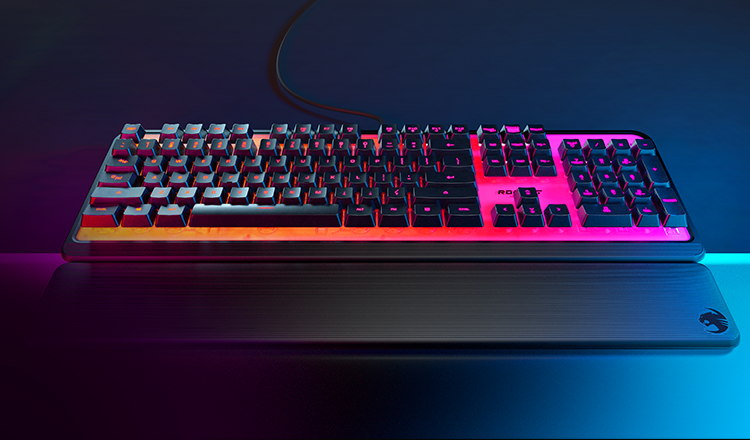 The Ryos boards are very similar in design to the Isku line, so if you love or hate the latter, the feelings will be the same about the former. The extra large palm rest is always a welcome addition, as is the cable channeling underneath. A price point of $149.99 for a mechanical keyboard isn’t bad, especially on a unit where you can hand-pick the included switches — a feature not found anywhere else. Speaking of unique features, the controllable lighting for each key bucks the zone lighting trend, which makes the Ryos MK Pro worth the price. That said, the low-end Ryos MK should be priced below $99.99, I think. It’s a more attractive buy at $75 or $80, but there’s not enough differentiation in the pricing for me.

Roccat also is showing off its near-final version of Power Grid, the iOS app that turns your iPhone into a secondary PC screen of sorts. The app is in approval limbo with Apple at the moment, and should be available by the end of the month. The Android version should be available at some point in February or early March. Roccat CEO René Korte is happy with the end result of Power Grid, but there is one change he would make if he could turn back the clock. “If we did (Power Grid) all over again, we would start with Android.” The development of Power Grid has been iOS-focused, although development has been “in parallel” more recently. The end result is a snappy interface with plenty of customization options, from custom game control layouts to news feeds to vital PC data.

The only hangup with Power Grid is cost; while the app itself is free, you have to pay 99 cents for every custom grid you want to make after the initial free offering. There are plenty of included grids, but making a custom layout for Word, Battlefield, etc., will cost you. Why employ such a nickel and dime scheme? Let me pay $5 for the app and be done with it.

Ultimately, the latest offerings from Roccat should please the PC gamer power user crowd. Mechanical keyboards and Android-friendly PC applications definitely have a market in the PC gaming space, and Roccat is poised to take advantage.

Game Front was on-site at CES 2013 (January 8-11), covering all the latest gaming gadgets. Check out all of our CES 2013 news, previews and features.