We reported last week that many fans of Fortnite, including world champions and prominent streamers, weren't happy with Fortnite's new two-person B.R.U.T.E. battle-mechs, and were campaigning for them to be nerfed or removed entirely.

We appealed to Epic at the time to do something about the problem, but now it seems they're refusing to acknowledge the problem even exists. While their spawn rate has been reduced, and their approach is now easier to hear, Epic have stated that the mechs won't be going anywhere.

Speaking in a recent blog post, the company said;

The mission of Fortnite is to bring players of all skill levels together to have a fun experience where anyone can win. For example—everyone having a shot at that first elimination or Victory Royale moment and the satisfying feeling that comes with it. Right now, we know there are players out there who have never had that opportunity. Another part of the mission is to provide spectacle and entertainment when playing Fortnite. The B.R.U.T.E. was added at the start of Season X with this mission in mind. Since then, we have seen players who had previously struggled with getting eliminations acquiring more, while the number of eliminations earned by more experienced players remained steady.

In other words, to Epic's mind, the B.R.U.T.E. is actually making the game more balanced and removes a barrier to entry for new or inexperienced players. If this is actually the reality, well, we don't know. Only Epic have access to the stats, and they claim that relatively few eliminations are actually caused by the mechs. 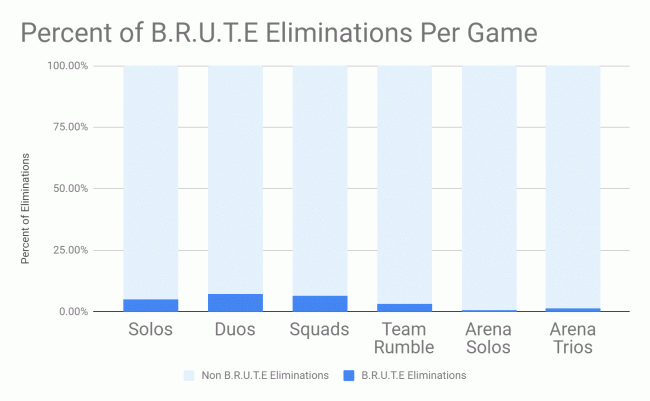 They posted a graph, as you can see above, which claims that such eliminations count for less than 10% of eliminations in most game modes, with Duos being the worst, as you'd expect given it's a two-person vehicle.

The #removethemech campaign is still going strong, though, and this announcement has done little to address the complaints of those who really don't like the mech being in the game.

Stay tuned to GameFront for more on this as we learn about it.

Comments on this Article
2 years ago by Adrian Țepeș

Garak is hands down the best side character in all of trek.