We've covered various peripherals so far in our top 10 lists of the best gaming hardware money can buy in 2020, including gaming keyboards, chairs and monitors, but one of the single most important components you'll buy for your setup is without doubt the mouse.

Anyone looking to get into competitive shooting games, for example, will quickly learn that the mouse is going to be one of the most important, and most frequent, interactions you have with your new gaming rig. It's not just about RGB lighting (although that is important) - both responsiveness, DPI (the resolution, or accuracy, of the mouse) and button layout are all key.

So without further a-do, here's our Top 5 gaming mice currently available to buy in 2021;

The Rival 600 mouse from SteelSeries is a fantastic entry level gaming mouse, and features all the bells and whistles such as RGB lighting, and a respectable DPI range from 100 to 12,000, meaning it's accurate. It also has 7 buttons, perfect for shooters.

One of the nice things about is the adjustable weights, allowing you to balance the mouse perfectly for you, and comfortable ergonomic design. The scroll wheel is also really nice, and it includes software for programming the buttons and adjusting the DPI.

At just $59.99 or thereabouts right now, it's really good value for money, and while the software is a bit buggy compared to others, and it's not quite as high-end as some others on this list, it's a must-have for first-time buyers or those on a budget.

I always like to include at least one wireless option, much as I did with the keyboards, and yes, before you all start hating on me, I know it's never going to be quite as good as their wired counterparts. That being said, wireless technology has come a long way in recent years, and there are many out there who value a tidy, clean desk space.

It's really well priced, too, at roughly the same price as the Rival 600, and has really comfortable grips, fantastic performance and a really impressive battery life. It has only 6 buttons compared to the 7 of the Rival 600, and only runs up to 10,000 DPI, but if you're after a wireless solution, you won't find much better than this.

This one is actually the cheapest one on our list, and so-far has some of the best specifications. It's a real winner in my opinion, especially for those on a budget. It features a fantastic textured grip design that is comfortable to hold, looks absolutely amazing, features all the obligatory RGB software, and goes up to a whopping 16,000 DPI, all for just $40 or thereabouts. 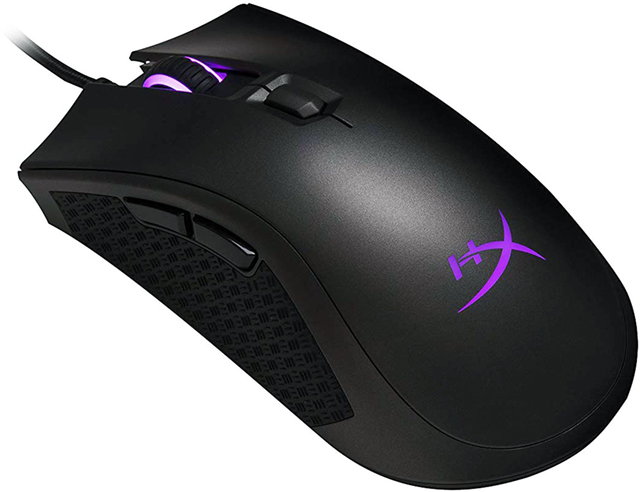 The downside though is the software that is bundled with it - it's slow, fiddly, and hard to use, frankly, which can be really off-putting if you're using it a lot. There's also only 6 buttons, which isn't too bad, but less than others on this list, although the thumb buttons get honorable mention as being really nice to use.

The G502 Proteus Spectrum is a fantastic all-round performer. It has a really wonderful design and features comfortable textured grips, and has 11, yes 11 programmable buttons, see if you can find them all in the picture below. Of course, it has all the usual features too, like RGB lighting and weight adjustments.

The weight adjustment is actually really nice, allowing you to finely tune the balance of the mouse, and being Logitech, the included software is really nice too. The only downside to me is it's size, it's a lot smaller than others on this list and, being a large-handed chap, that's a little off-putting. That being said, for the majority of gamers, this one is a fine choice, and it's just $50 currently at most major retailers.

Okay, here we go. Razer are, arguably, the gold standard in gaming mice, and the Naga series are fantastic in every way. The latest in the series, the Naga Trinity, has improved on previous iterations in several ways. The mouse features several customization options, such as three separate side plates that have different button layouts to suit the player or that particular game, giving it a lot of versatility.

The software is also good, making it really easy to customize, and you can set loadouts for each plate you have. It's almost 3 gaming mice in one, and with a huge 16,000 DPI, it's one of the best performing, too.

Of course it has all the usual suspects, such as RGP lighting and weight adjustment, but there's no height or length adjustment, and the button layouts can be complex for a couple of the three side plates available.

That being said, it's by far the best and most versatile mouse on this list, sadly it's also an eyewatering $80 currently, but in my opinion, well worth it.

And that's our list, do you agree with our picks? Let us know what gaming mouse you use down in the comments below!