Published by RadioactiveLobster 1 year ago , last updated 1 year ago

4A Games has dropped some details on the upcoming Enhanced Edition of Metro Exodus that is coming to PC and the PS5/Xbox Series family.

Metro Exodus was one of the first triple A games to feature Ray Tracing in its PC version when it launched two years ago and last November, it was announced that the game would be coming to PS5 and Xbox Series X|S as part of a free update, it wasn't fully known what that would mean for the PC side of things. Now we have some more details on what the high-end PC will be getting.

PC specifically will see the implementation of DLSS 2.0 (for NVIDIA Hardware) and will be the only platform to have Advanced Ray Traced Reflections.

In general, the update will feature a Fully Ray Traced Lighting Pipeline, which will mean that every single light source in the game will be ray traced, not just the Sun. The Ray Traced Global Illumination and Emissive Lighting that was included in the the original PC version gets updated to take advantage of new optimizations and features as well. Included is a chart that details the differences between the Xbox Series X|S/PS5 edition of the game and the PC Enhanced Edition. They are targeting 4K/60 FPS on the Series X/PS5 and 1080p/60FPS on the Series S. It's nice to finally see consoles powerful enough to take advantage of these advanced features. 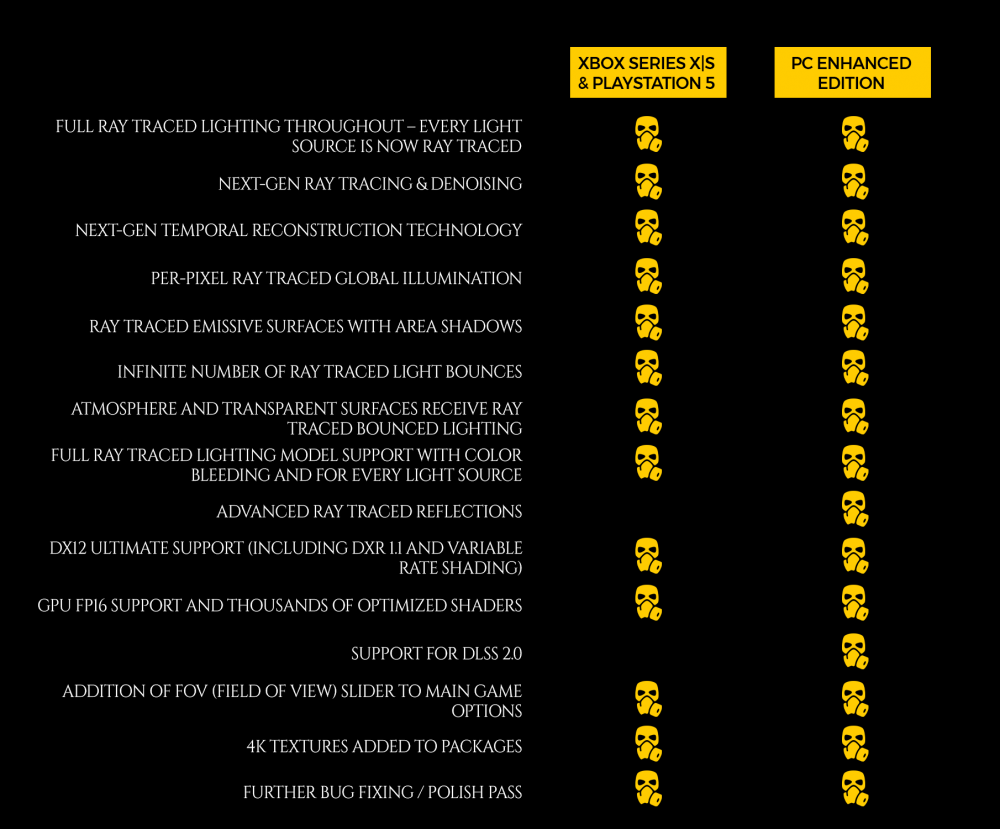 4A Games states that the rework is so extensive that the PC Enhanced Edition cannot be done as a simple patch or update to the current game, it will need to be its own separate product and will require an DXR (RTX for NVIDIA or 6000 series for AMD) capable or higher GPU as a minimum.

Don't worry though, it will still be free to all owners of the original game on STEAM, GOG and the Epic Games Store. There will be no one year hostage scenario this time before you can get it on STEAM.

The update is planned to launch Spring 2021 on the PC. The long planned Mac and Linux versions of the game are also announced to come out this year.