I'm going to be drawing a lot of comparisons to the Fallout universe in this review, especially New Vegas, and I really wish I didn't have to, because this game really deserves to stand out on it's own merits and not it's obvious ancestry. I've spent hours trying to think of a way of writing this review without mentioning Fallout, but I simply couldn't. So I'm going to embrace it, and hopefully demonstrate why the comparison is ultimately unfair.

The Outer Worlds is an action RPG game similar to... Fallout, developed by Obsidian Entertainment, the developers of Fallout: New Vegas, many team members of which are veterans of the original Fallout games. There, I mentioned the word Fallout three times in that last sentence alone. The game is set in an alternative future where the timeline of mankind diverged around 1901. The backstory explains that U.S. President William McKinley survives assassination, meaning Theodore Roosevelt never became president, and as such, mega-corporations dominated human society. 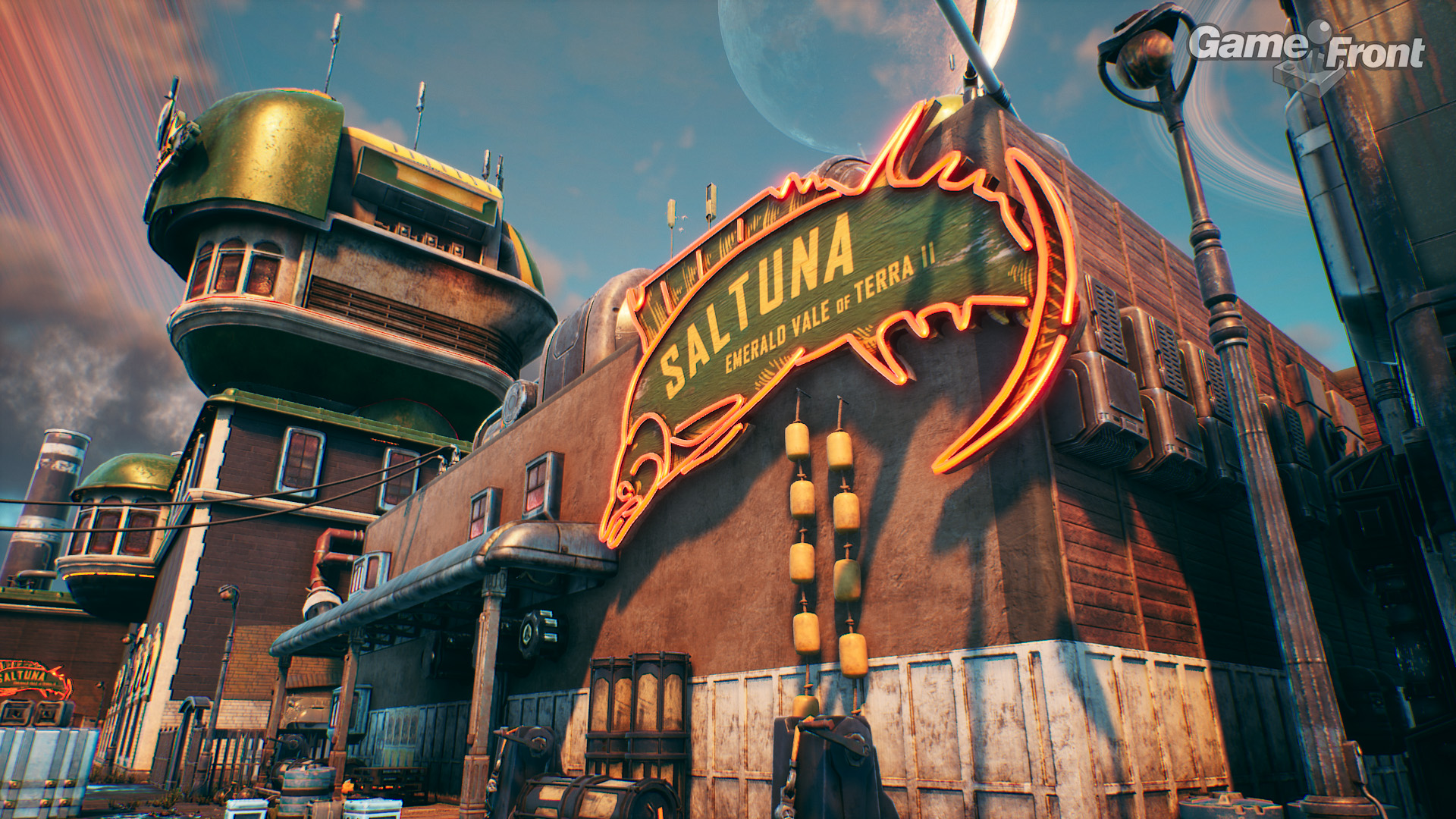 The game is set in the distant future, though, where such corporations have fundamentally overtaken all way of human life, terror-forming and colonizing planets in the name of corporate expansion. Your character was originally a passenger on a colony ship headed for the Halcyon system, only to find themselves awakening from Cryosleep around 70 years after they'd expected to arrive, with their fellow passengers still fast asleep, unaware of what is happening in the world around them. You're sent on a mission to investigate the true nature of the evil corporations who rule civilization and discover the truth of the events of your colony ship.

The characters and setting of the game is richly entrenched in this lore. You start out heading towards a town called Edgewater, where the inhabitants are dedicated solely to the town's main source of income, the Saltuna cannery. Life in Edgewater is hard, with the town struggling to survive the harsh limitations and productivity expectations set on it by Spacers Choice, one of the evil corporations in the game and one of the biggest factions in the Halcyon system.

The first thing that struck me about the characters you encounter in Edgewater is just how responsive they are to your actions, even the clothes you're wearing. If you're wearing the armor of the Marauders, bandits who rebel against corporate society and anyone they don't like the look of, the townsfolk will react negatively to you, mentioning your poor choice of attire in dialogue seamlessly. 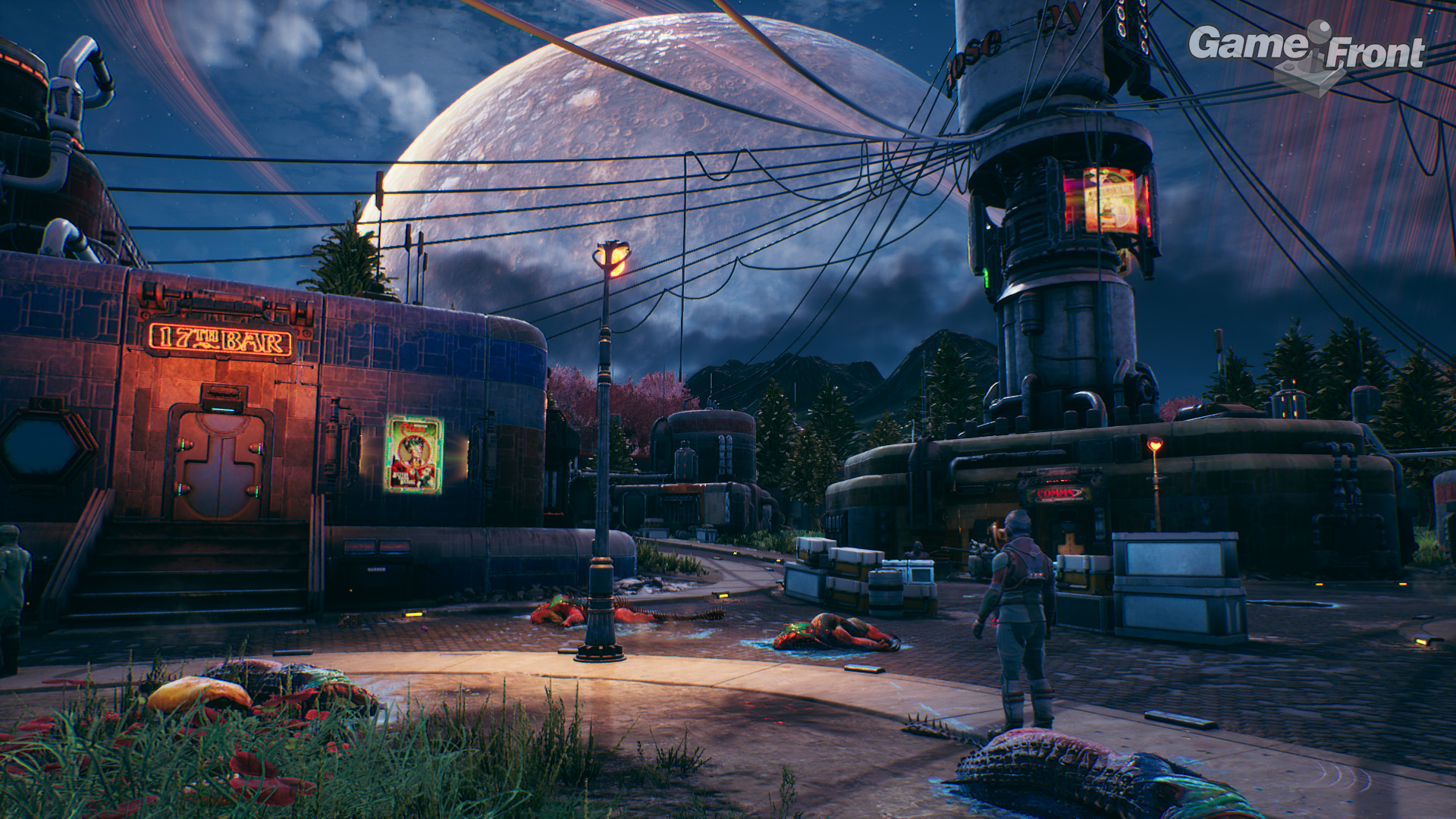 Side quests and the main quest blend wonderfully, and soon the storyline fades away from the overall premise into a wide range of different encounters that revolve around society, greed and moral choices. Early on in the game you're presented with one of these heavy moral choices of right and wrong, which while obvious on the surface, becomes more complex the further you delve into it. You're forced to choose to divert power from the region's only power reactor to either Edgewater itself, where it's intended to help ramp up production at the town's Saltuna cannery, or to an outlying colony of rebels who have decided to reclaim their freedom and independence. One of these two communities will be left fending for themselves without power, and it's up to you to decide.

The trouble is that the majority of citizens in this game are decent, honest people who are so corrupted by corporate society that they simply don't know any better. They're used to living in a world where you're expected to pay rent for your own grave plot, or pick up the tab for somebody's industrial accident simply because you were the closest one to them at the time of death. As such, removing power from the town will disrupt their way of life and leave them defenseless and at the mercy of the corporation looking for answers.

There's over 30 hours of gameplay, featuring a complex and interwoven story, consisting of the main quest, various side quests and companion specific quests, that are only available with certain companions. Speaking of companions, the game gives you the ability to invite various NPC characters along the way to join your 'crew', and you're able to have up to two companions joining you at any one time. These companions are unique in their skillsets, and have various benefits such as being good in a firefight or having a high skill in engineering. You can have up to five characters on board on your ship as part of your crew, allowing you to choose the best two for the task you expect to befall you next. 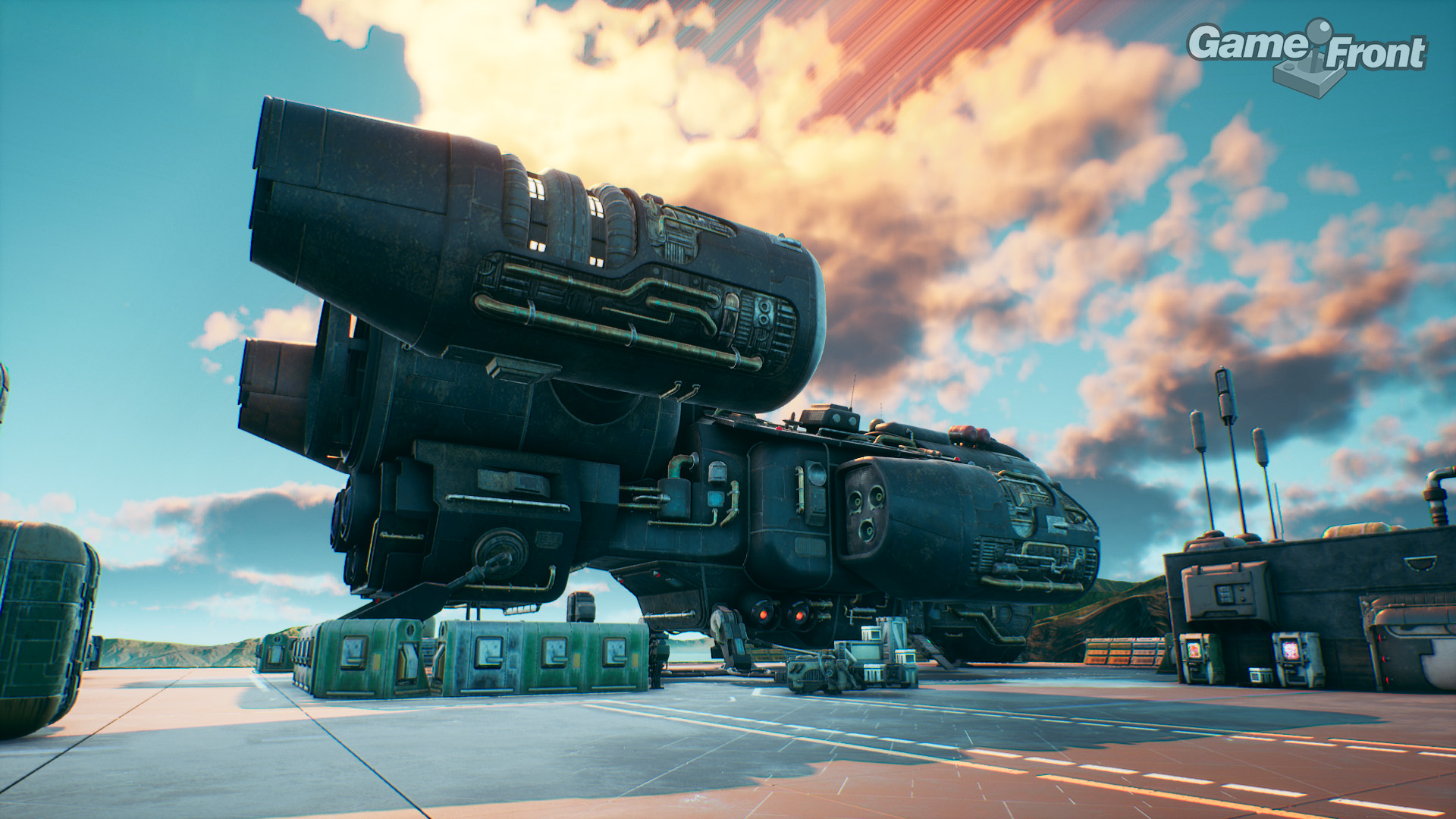 Yes, I forgot to mention, you have your own ship - your're a captain! Okay, you kind of accidentally inherit your ship from the previous captain, who died, and you have to pretend to be the ship's former captain in order to convince the senile on-board computer to accept your commands. The ship serves as your central hub, allowing you to interact with your shipmates, travel between planets and regions, and access various benches to upgrade or modify your gear, for example.

Where the game does differ significantly from Fallout is it's environments. While Fallout tends to favor a massive open world approach, The Outer Worlds is divided into smaller regional maps that you must use your ship to navigate between. As such you can't walk from one town to the next, even on the same planet. The environments do feel much more enclosed as a result, there is less emphasis on exploration than there is in the Fallout universe. You feel like you should stick to the beaten track much more, and each environment, normally consisting of a major town and various outlying buildings or settlements, are not especially large. 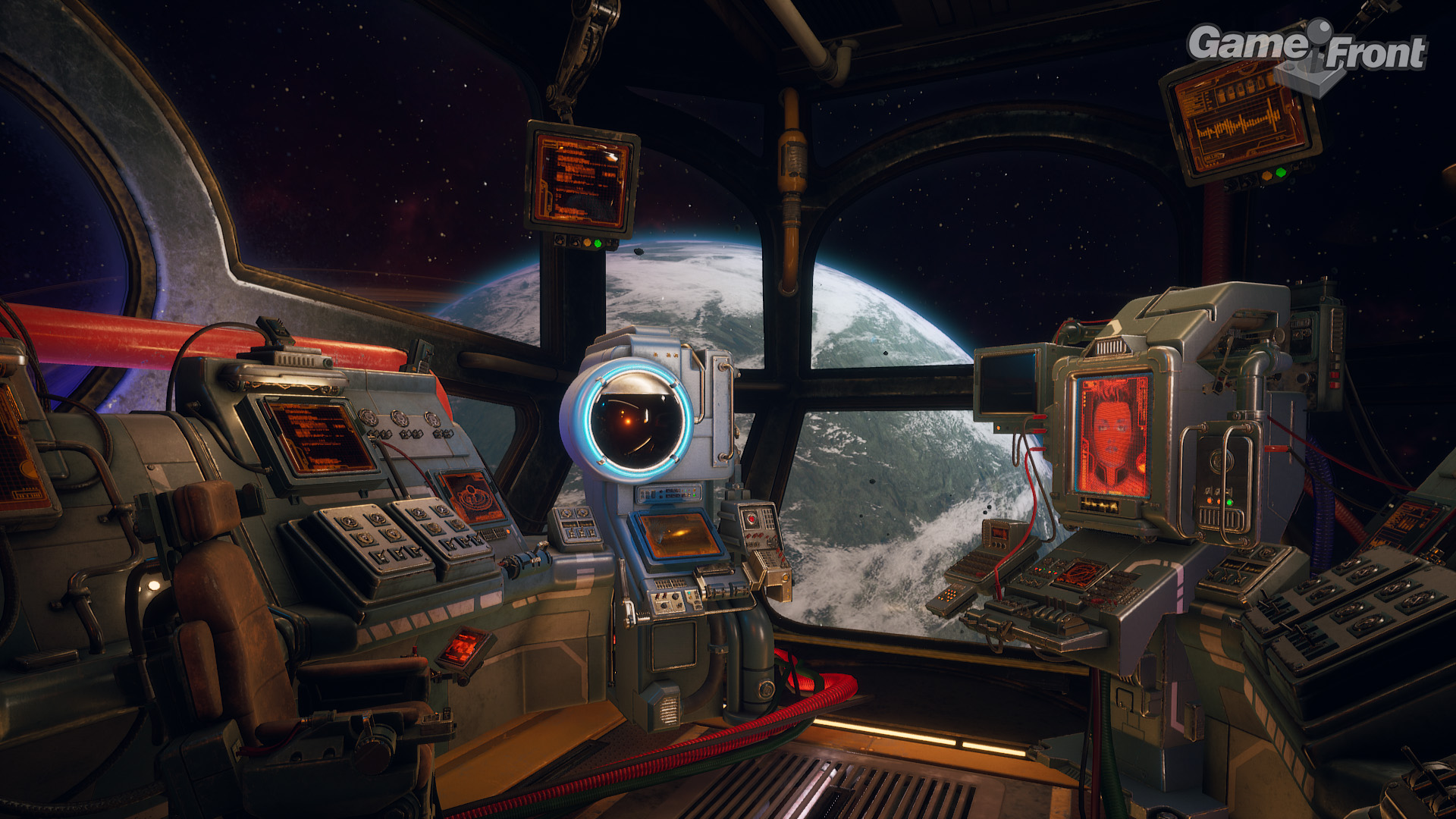 This is made up for by just how amazing these environments are though, both visually and in terms of attention to detail. In fact, it took me a while to realize what was going on, while I certainly felt like something was a little different, it didn't negatively impact on the experience enough for me to notice until I had given it some consideration. It's not entirely a bad thing, there's less trawling across boring generic landscapes for the hell of it, allowing more focus on the story and the action.

It's not just alien planets, though - there's also a central space station, Groundbreaker, outside of corporate control and serves as a central hub for traders and travelers. It's a bit like a Deep Space Nine or Babylon 5, a promenade of shops and services, and traders willing to buy or sell anything you need. There's also the lawless land of Monarch, the wild west of the system where anything goes. 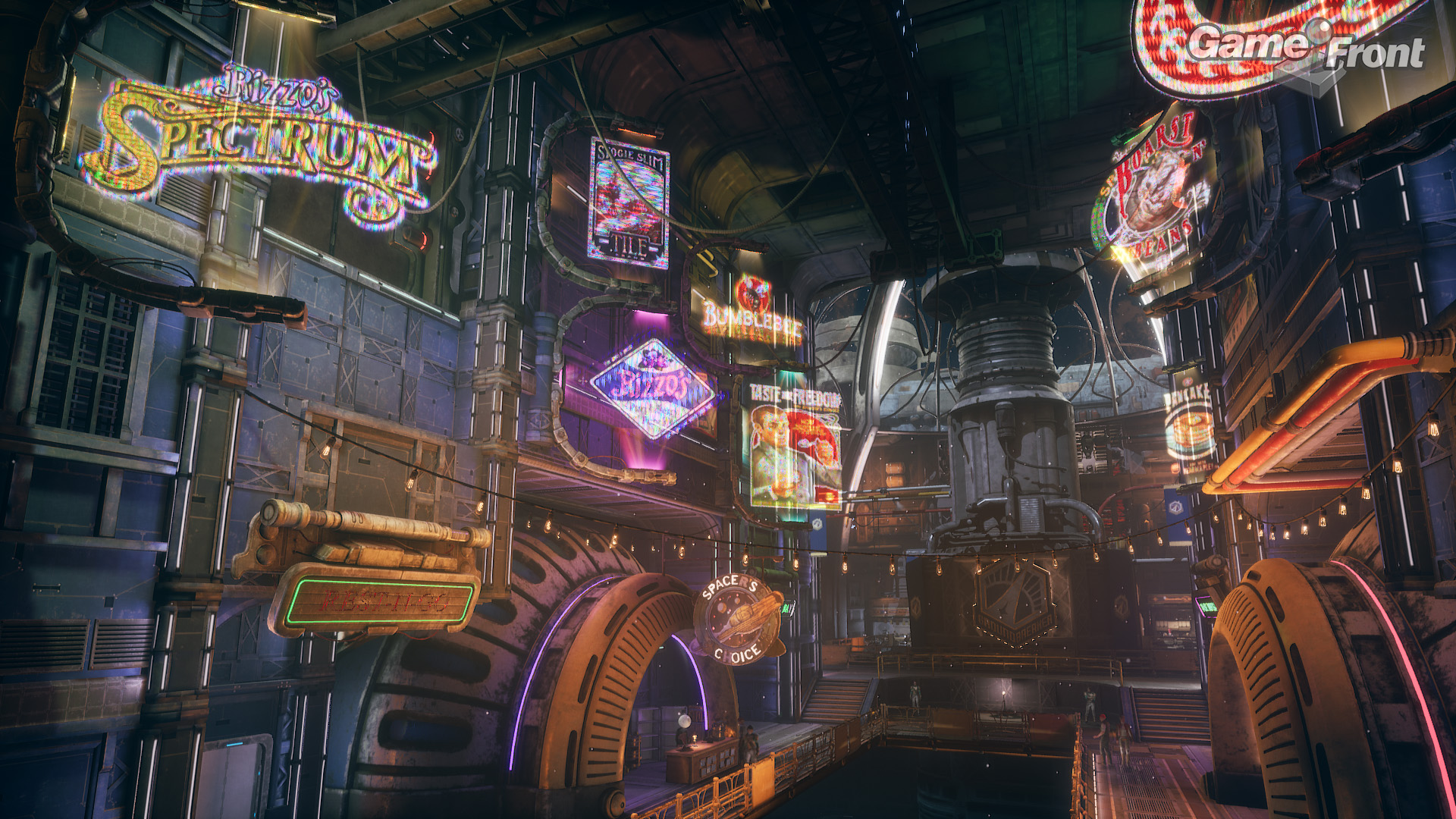 Much like Fallout New Vegas, the environments and characters are steeped in that trademark dry sense of humor that really shines in the setting. I can't help but feel like the game is a commentary on society today, there's parallels you can draw to many other science fiction franchises throughout the game though, no doubt references or nods, all wrapped together in excellent lore and brilliant voice acting.

Another way the game both strongly parallels and significantly differs from Fallout is the gameplay mechanics. Firstly, the dialogue system - this is exactly what Fallout 4 should have done. It works exactly like it does in Fallout 3 / New Vegas, giving you a choice of options, without your character being voiced, leading to genuine difference in outcomes of a conversation. This is exactly what you'll be expecting if you've played New Vegas, and frankly this didn't need fixing.

Where there is a difference is that this game is entirely first person only. Slightly bizarre given you get to customize the appearance of your character at the start of the game, but hey, mirrors exist, I guess. This isn't entirely a bad thing, though, and the more linear or enclosed environments do lend themselves to a first person perspective much more than third person would.

As any good RPG should (looking at you again, Fallout 4), the game allows you to approach any given quest from a variety of angles, these mainly being sneaking, talking your way out of a situation, or just going in all guns blazing. There's different potential outcomes depending on your approach, too, and as such I really feel like I am in control of the destiny of the story-line, something Fallout 4 was severely lacking. 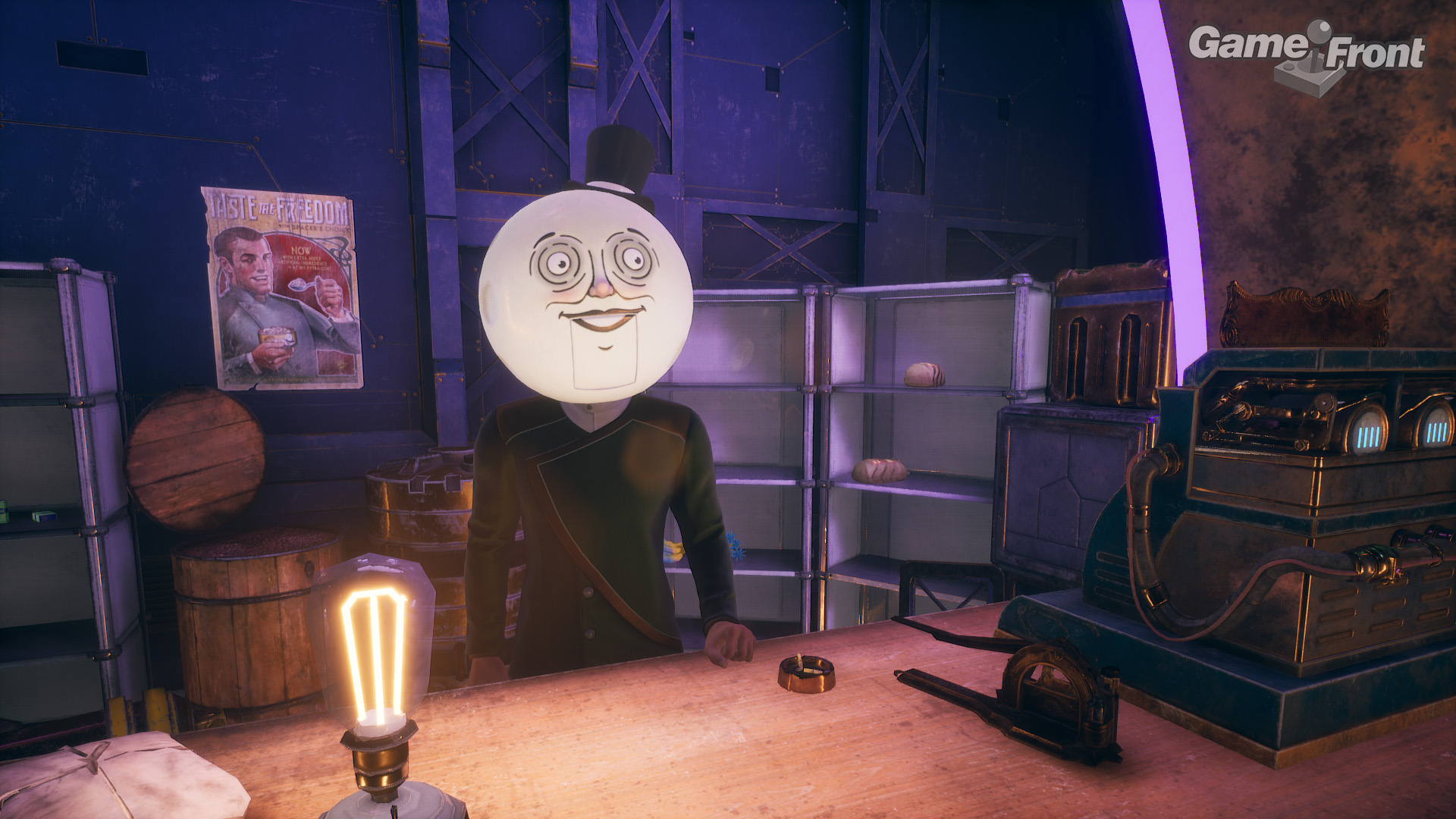 There's even a return of the faction system from New Vegas, which gives your actions extra weight. You can fall in and out of favor with the various corporations or outlying rebel factions in the game, although there's less of a likelihood that these factions will just attack you on sight, instead it changes the way you'll be able to trade or navigate dialogue options with NPC's from those factions.

In terms of the combat side of things, the VATS system from Fallout has been replaced with a slow motion ability, an apparent side effect of Cryosleep, which serves a similar function without the automated targeting. You'll still need to manually aim, which makes it a little trickier to use than simply putting 4 action points onto a head-shot, but as such focuses more on skill and less on chance.

There's also the ability to level up various skills and unlock perks along the way too, much as you do in Fallout, although one curious new addition is the "faults" system. Occasionally the game will occasionally offer to give you a perk in exchange for accepting a fault, or debuff. The trouble is, you're not sure what perk you're going to get in exchange for the fault. You're able to accept or refuse, so if the fault offered is one you don't feel will particularly trouble your gameplay style, it may be worth a gamble.

Much like Fallout too, you can loot materials from bodies, storage containers and so forth, and use the raw materials gathered to upgrade and modify weapons or armor. The system works very nicely, not too dissimilar to New Vegas, and you can also opt to spend money at various vendors to obtain similar upgrades.

There's the usual range of combat styles too, with melee, light and heavy weaponry all being present and correct. The gun-play is pretty excellent, although there's no effective cover system which can prove tricky in various environments. 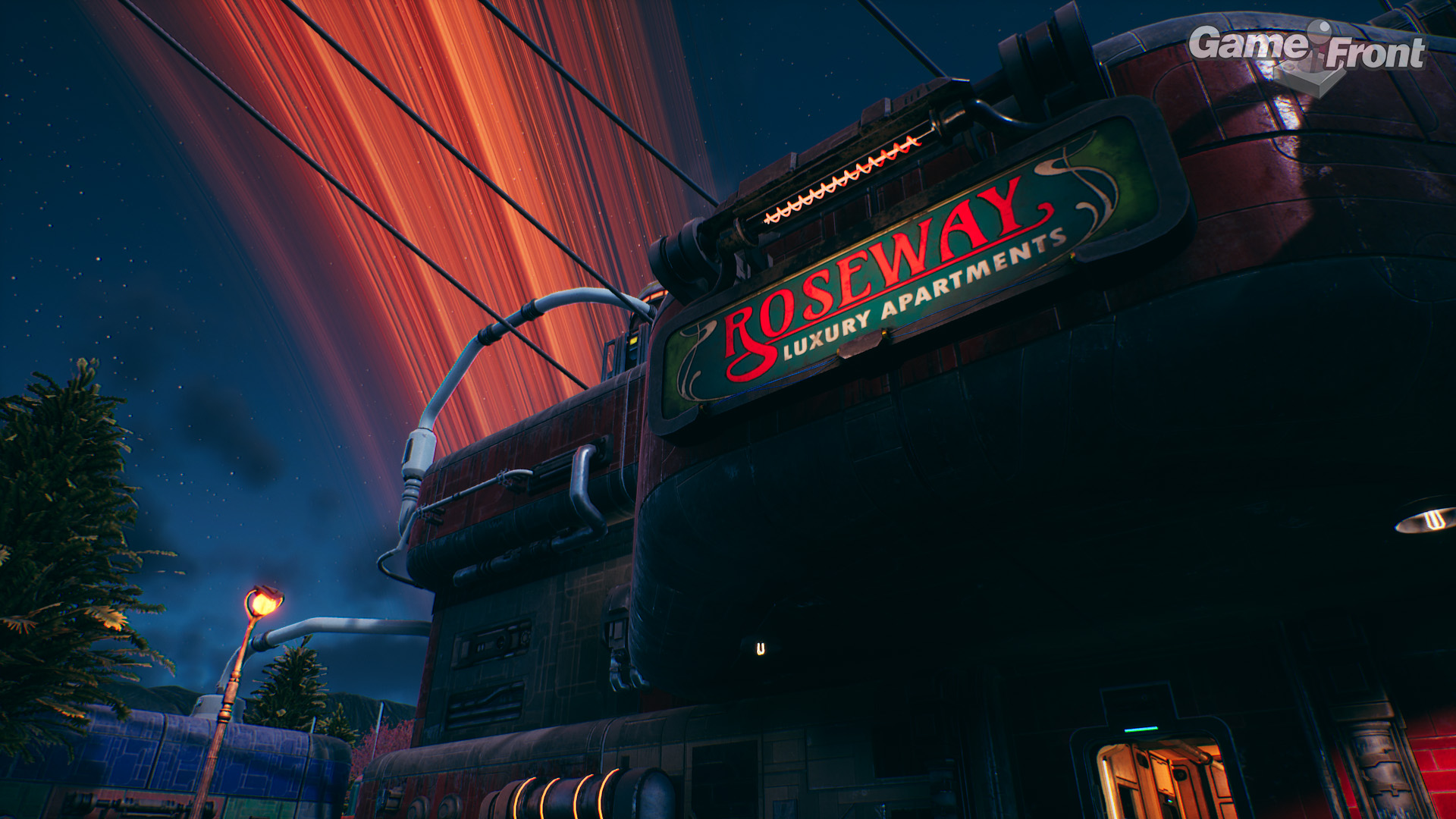 The game is overall fairly polished and bug free, too. It's not perfect though, I did see at least one phys-glitch occur with an NPC on The Groundbreaker, and occasionally there is a very awkward, long pause between engaging with an NPC and their first dialogue loading up and executing, sometimes making me wonder if the game had crashed. Still, these are very minor and hopefully can be addressed in future patches.

All in all, The Outer Worlds is an excellent RPG that will feel both familiar to Fallout veterans but completely new with it's approach to environments and storytelling. Keeping the best of the old formula but improving where required, it really does shine on it's own merits, and will no doubt escape the shadow of it's Fallout lineage, even if I failed to do so in this review.

With it's immersive environments, genuine freedom of choice and excellently executed story,  this is by far the best action RPG I've played in a long time, and as such, The Outer Worlds is a game I can heartily recommend.

Thanks for the review, FileTrekker! I'm definitely looking forward to finally playing this!