I'm probably one of the few gaming journalists actually qualified to talk about Train Sim World 2020. I've been a huge train enthusiast since I was a young kid, and could bore you to death for hours on end talking about the intricacies of how block signalling works or why a Class 37 sounds a lot better than a Class 47. That being said, I'll try and keep this review about the game, and not the trains.

Train Sim World 2020 is technically not a new game, rather, an update to what was previously known simply as 'Train Sim World' - this yearly update model is one that has long been established by Dovetail Games in their Train Simulator series, which Train Sim World is looking to take over from. Sadly, it's still a long way from being anywhere near as comprehensive as their older series, and even though this update does bring a lot of new features, they fall way short of expectations for me.

We should start by addressing what the update does actually do. The first new feature that has been added to the game is a brand new "Journey" mode. It allows players to enter into what Dovetail call "over 24 hours of continuous gameplay" as you journey through learning how to drive the various locomotives on the route, and complete various services and scenarios. The feature keeps track of your progress through your journey, and it does indeed contain an awful lot of gameplay. 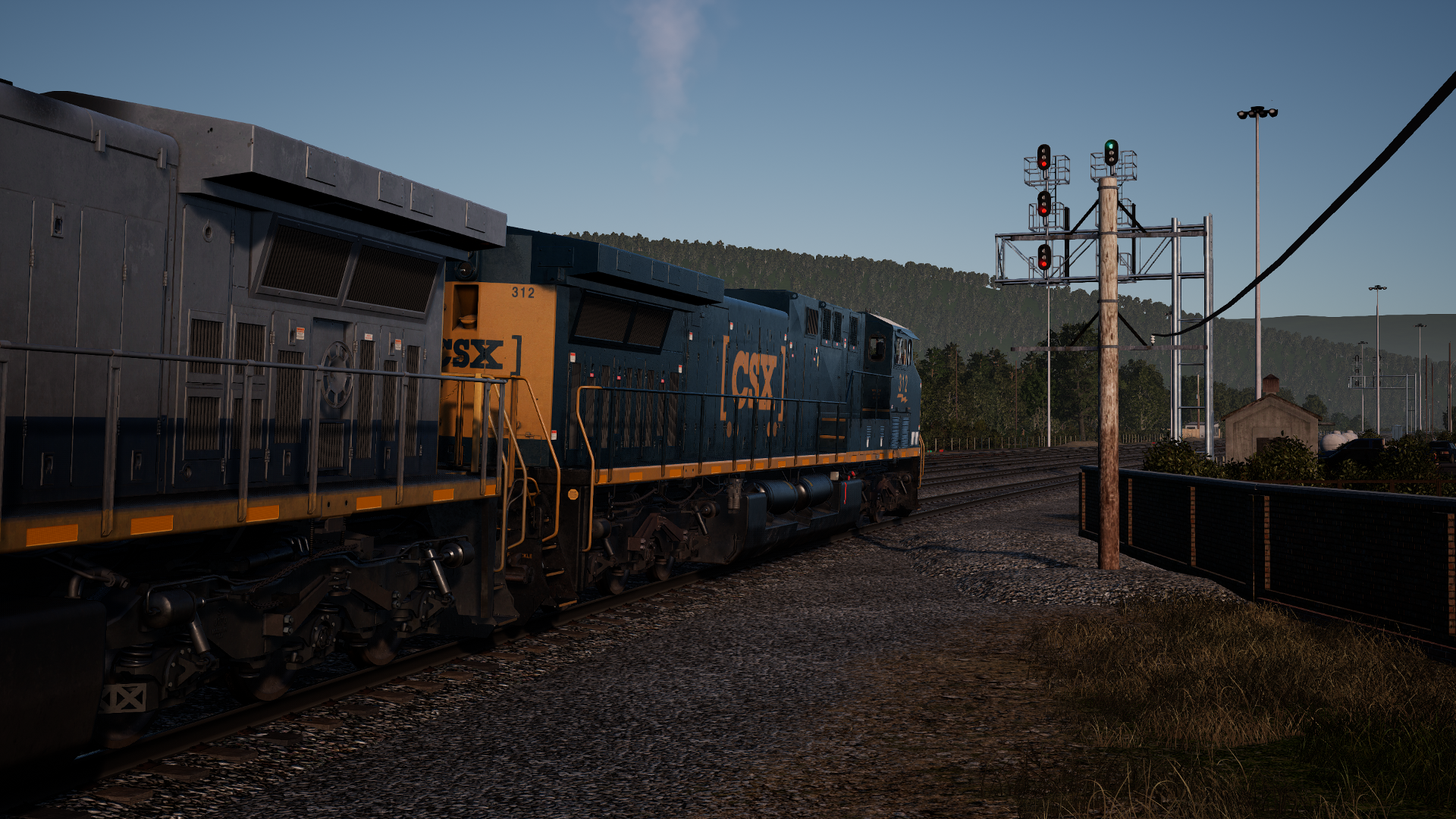 The problem with journey mode is it's little more than a playlist for content that already existed in the game. There's nothing truly new here - it simply throws you between scenarios and timetabled journeys that already existed in the game, one after the other. Some thought has been given to the structure of these, for example, on the Great Western Railway route, you'll start off learning the Class 166, then do a few scenarios and timetabled trips, before moving onto the Class 43 HST, and so on.

That being said it's not really much of a feature for me - these are all scenarios and tutorials I've done before. I can see how newcomers to the game may appreciate the mode, it's a nice, structured way to work through what the game has to offer, but for veterans of the Train Simulator series, there's nothing exciting to see here, unfortunately.

One new addition I do welcome, though, is the enhanced driving statistics and scoring system. Previously, this was very much lacking. The game didn't care how fast you went, for example, or how accurate your stops at stations were - heck, it barely cared if you were on time, simply denoting this on a basic end screen with nothing more than a tick. Now, things are much improved. For the first time, there's a scoring system, and driving under or at the speed limit will accrue more AP during a trip than driving recklessly fast. Similarly, points are awarded for stopping accurately at stations, and for keeping to time. For the first time, there's a score to get, and a reason to drive properly, which for me adds a whole new level of enjoyment to the game. 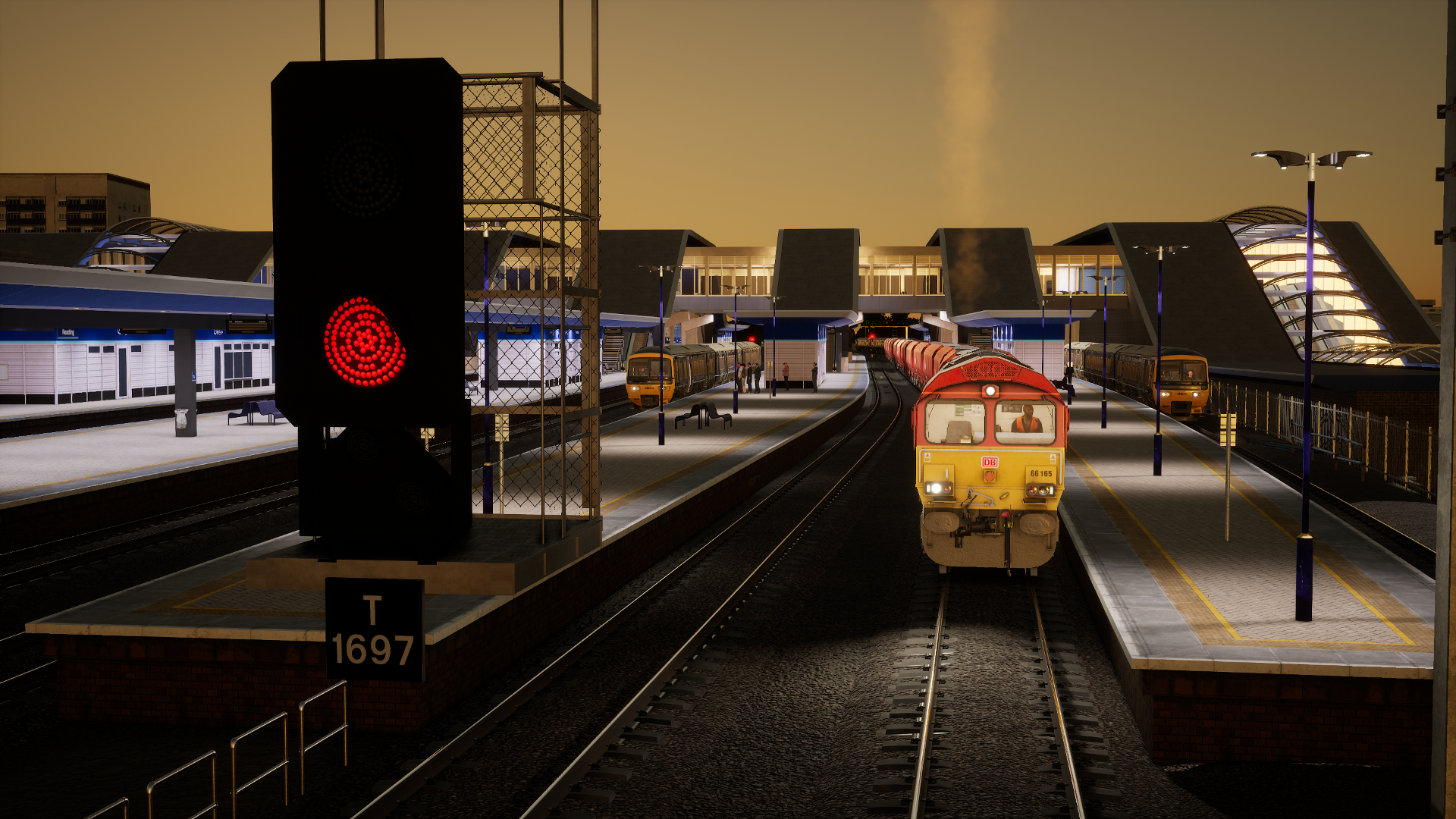 Better still is at the end of a journey, a new results screen will appear showing you a graph of your performance. Here you can see your speed relative to the line speed limit, along with station stops and their due time and actual arrival time, along with driving stats and an overall score.

This feature sounds basic, and has existed in the older Train Simulator series for years, but it's been missing from Train Sim World for some time now, and frankly it's only now does the game feel like an actual game - before it was simply drive trains how you like, with no consequence.

The other major new addition to the game is introductory tutorials. I found these more annoying than welcome, each one you're forced to play when first entering a route, even though I've played through all the tutorials before, and despite each one being very much the same as all the others. You start on a platform, walk over a bridge, get on a train and listen to some speel about the route. It's literally identical for all of them, and rather annoying and pointless as a veteran to the series. I can see the appeal to newcomers, but again there's nothing to see here for people who already owned the game.

And this is where things go downhill in my eyes.

Firstly, the UX - they've crammed a lot more features into the existing UI which, while welcome, is not very optimally laid out. There's now a choice of switching the 'diorama' used in the background of the menus, with both a rural station scene and the previous 'depot' to display your locomotives. The menus now use a really garish and ill-fitting green color, though, which I really don't understand or approve of, and overall the menus now just feel more cluttered and fiddly than before. 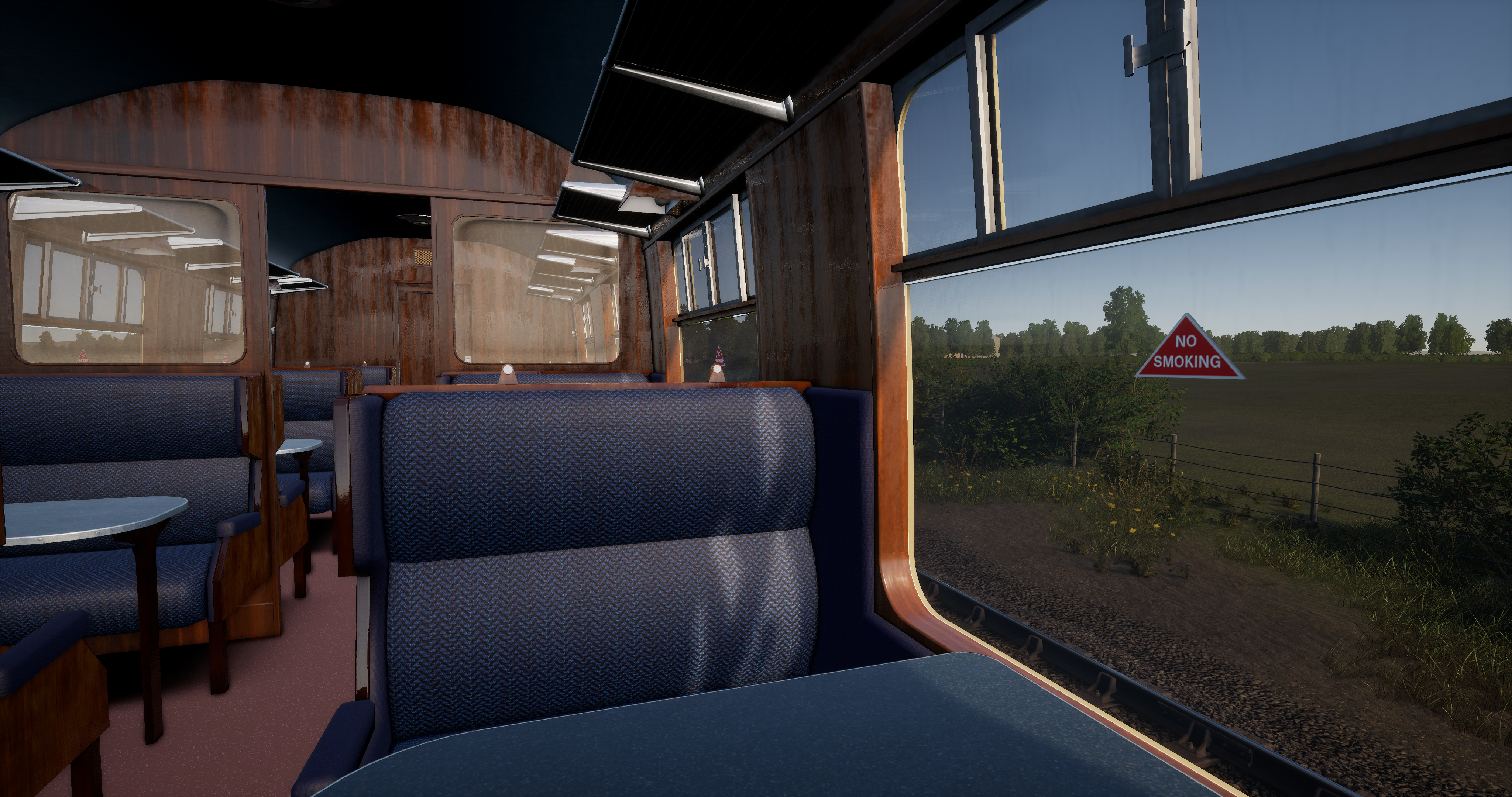 What's even more annoying is the complete lack of bug fixing or attempt to address the actual problems with this game. As far as I can tell, none of the well-known bugs have been fixed. The Class 166 safety systems are still bugged out and can't be enabled through the control shortcuts - there's also still no way to have safety systems on by default, a criminal oversight, frankly, and one I never understood. The game is frankly too boring without safety systems, and a simple additional tutorial teaching newcomers how to use them would be a much better solution than just disabling them by default to try to appeal to casual gamers.

According to the patch notes, work has been done to improve the collision detection on the North TransPennine route. I decided to test this, and indeed, they have finally put clipping brushes around buildings and areas the player is not supposed to go - when the route originally released, it felt rushed and the amount of areas without this simple attention to detail astonished me. The problem was, within 5 minutes of starting the route, I had managed to clip through the floor and out of bounds. Whoops.

I also managed to both find a levitating female co-driver on one of my trains, and trigger an AI bug that caused all the trains on the route to get stuck at red signals, all within the first half hour of trying the update out - so little has been done to solve these long standing problems, although the patch notes do note that driver models will no longer T-Pose in certain situations, one bug I did find quite often occuring before the update.

The patch notes also claim some core engine updates to improve CPU performance. Don't get excited though - the CPU performance and optimization is still, quite frankly, trash, and even on the highest end machine (I am playing on a Core i7 with a GTX 1070) you can expect frame-rates in the 30s and 40s at best, and these will often dip into the 20's or lower when another train or heavily populated area is encountered. 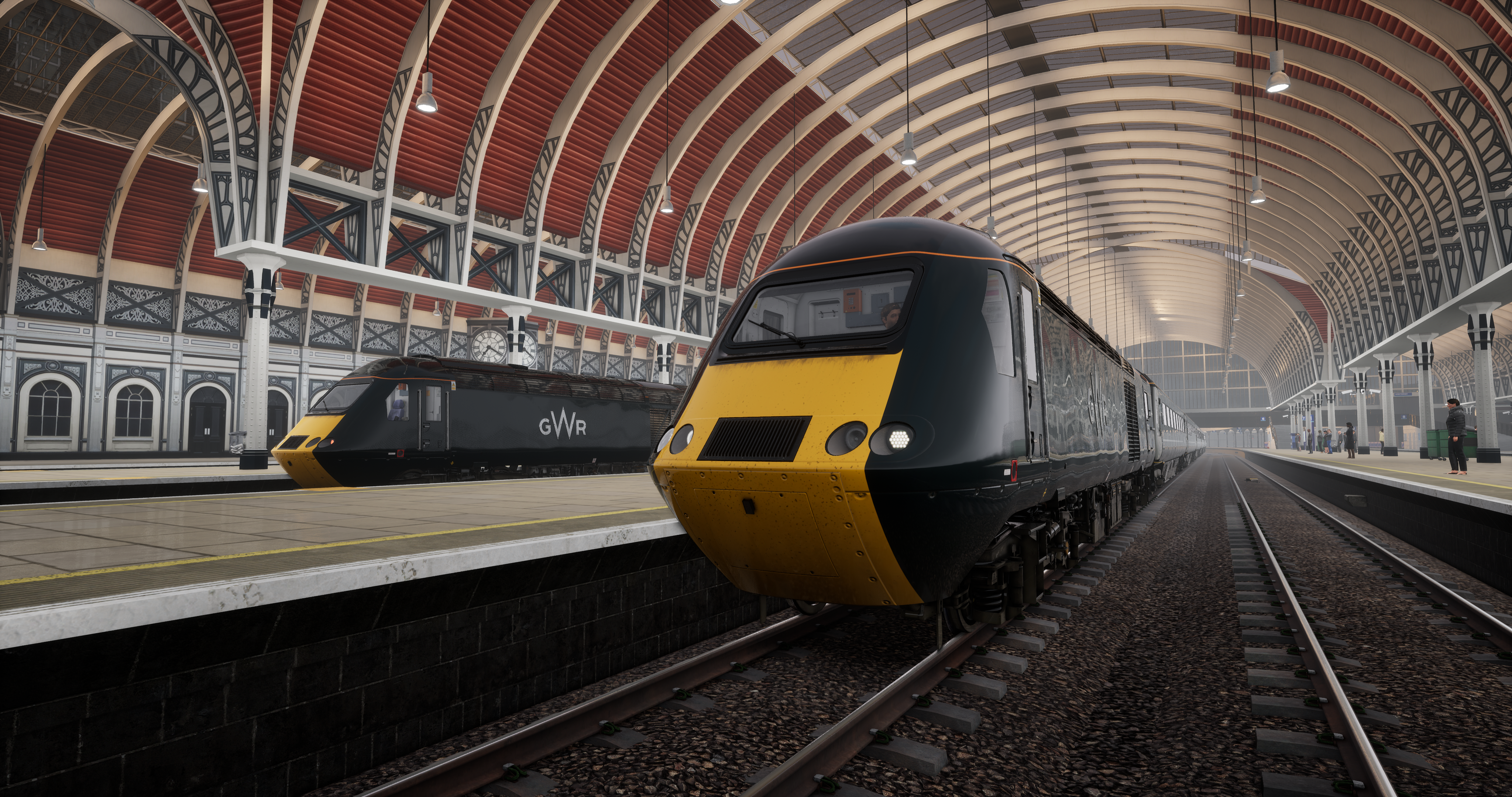 This isn't due to the graphics engine, either, as the game is powered by the Unreal Engine, which is pretty seasoned at this point and is well known for giving good performance. Instead it seems to be all down to the game's physics engine, which is proprietary and attempts to perfectly emulate the inner workings of locomotives to give the most realistic experience possible. The issue is it seems to be an absolute CPU whore.

There's plenty of purists out there who will lambast me for saying this, but honestly, as a game, it would be far better to have a slightly less accurate physics system and a serious bump in frame rate. Given the trains have basic safety systems disabled for simplicity of casual gamers, something you'd never see in real life, the decision to force such a monster of a physics system on people seems a little odd, to me.

Also lacking is community and mod support. These are also way overdue, and despite being promised, seem far away from becoming a reality. Unlike the now decade old Train Simulator, there's no route creation tool, no scenario editor, no way to add your own locomotives or reskins, there's nothing. The modding scene for the game is basically non-existent as a result. The choice of Unreal Engine for the game seems to be an odd one, and the crux of this problem. As so much is pre-baked or proprietary, to allow most modding would mean that Dovetail would have to open-source their routes and locomotives, and they don't want to do that, as DLC is famously their business model.

Speaking of which, it's worth mentioning that if you want new routes or things to do, then DLC is the only way to do that, and each DLC is effectively around the price of a game, at the £20 or so mark. It's an extremely expensive proposition to get involved in this game, frankly, so unless you're an enthusiast, it's really not worth it. Even just one DLC locomotive with one or two scenarios is around £15, which is obscenely expensive for what you get. You can pick up GTA V on Steam right now for the cost of one of these routes.

So on the whole, it's a welcome free update to the engine, but there's nothing really exciting for existing players here, and nothing has been done to actually address the game's fundamental issues. Hopefully future updates will do more to address these shortcomings, given the game is now (presumably) out of beta, but only time will tell.